Trolls are massive, strong, and dim creatures, often found in caves, the armies of Sauron, or in poorly-moderated Internet discussions. In this game, they are a Shadow race, appearing first as a single

Moria minion, and later as

The first troll minion was Cave Troll of Moria, Scourge of the Black Pit (1R165) 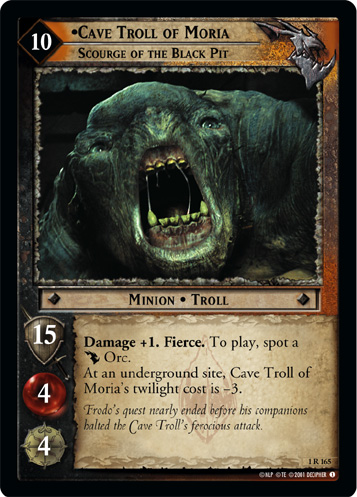 Moria minion which set the tone for most later troll cards. It's expensive but cheaper under certain conditions, both from its own Twilight cost reduction at Underground sites (sites 4 and 5 in Fellowship Block) as well as from Troll’s Keyward (1R199) 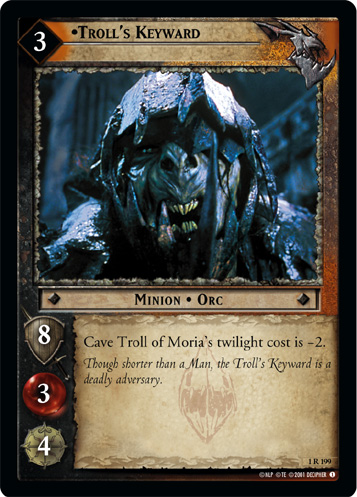 . It's so strong that it threatens to overwhelm unprepared companions, especially when equipped with its exclusive possessions, Cave Troll's Hammer (1R166) 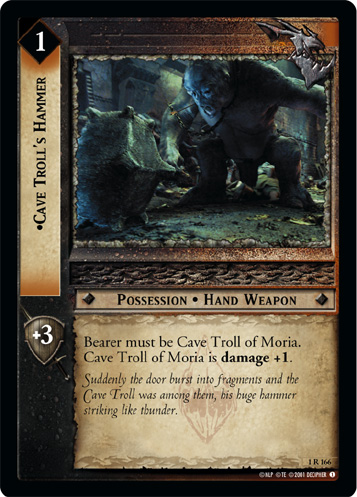 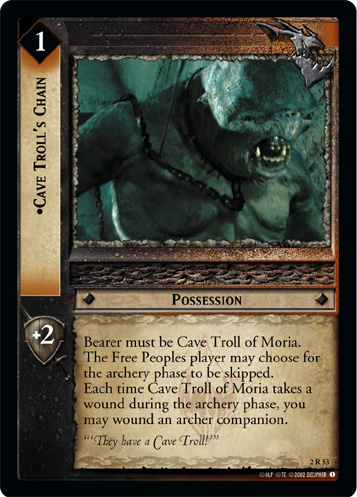 , or the only possession it has in common with other 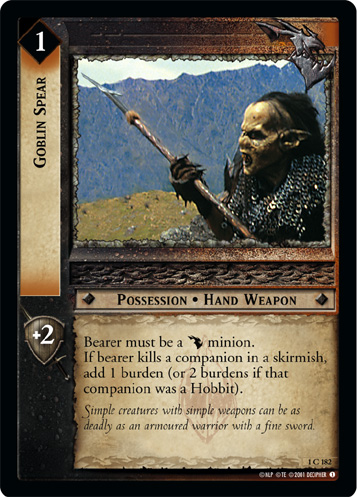 . And it's both Fierce and Damage +1, allowing to do four wounds if allowed to rampage unchecked. It wasn't always played, but it would occasionally appear in Moria Beatdown, a strategy on higher-strength minions supplemented with Moria Axe (1R190) 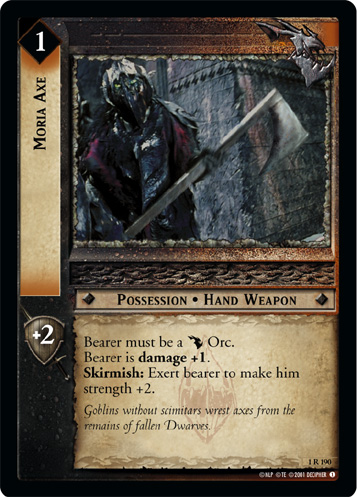 (as opposed to the typical

For the next nine sets, all of the trolls were 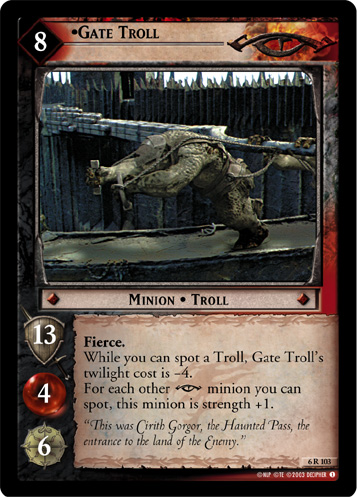 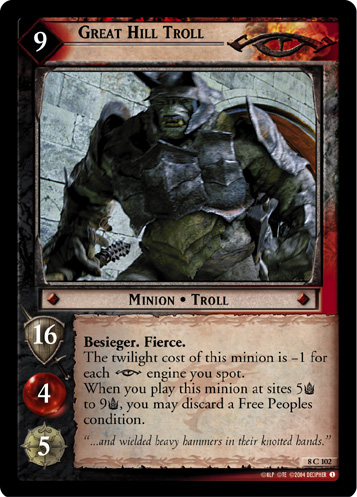 and Troll of Gorgoroth, Abomination of Sauron (8R108) 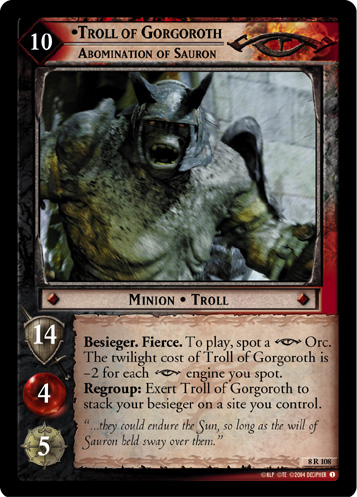 . Those trolls were key parts of the Besieger deck of King Block and Movie Block, which played many Engine conditions and possessions to set up to overrun the Fellowship with discount-price trolls. (This set also had Olog-hai of Mordor (8R105) 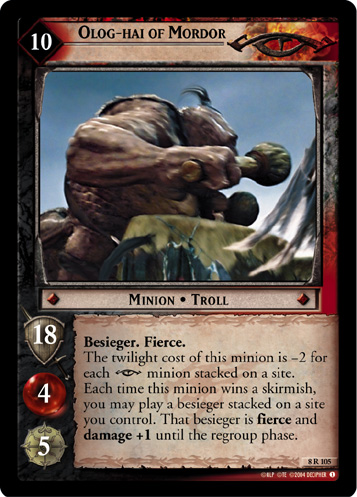 , but its much-more-difficult discount condition meant that it's generally skipped.)

Sauron besiegers is a common Shadow side in Movie Block to this day. Mount Doom later introduced Troll of Cirith Gorgor (10R101) 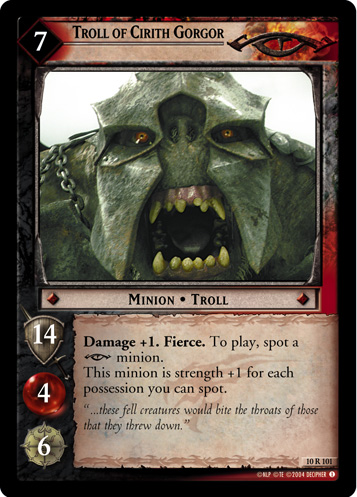 , a strong minion similar to the Cave-Troll, and it can be played in any

Sauron deck that can afford its high Twilight cost.

Starting with the Shadows set, Shadow cultures were reorganized, and all subsequent trolls are

Troll Swarm is a beatdown strategy that centers on Troll’s Keyward, Keeper of the Beast (12R105) 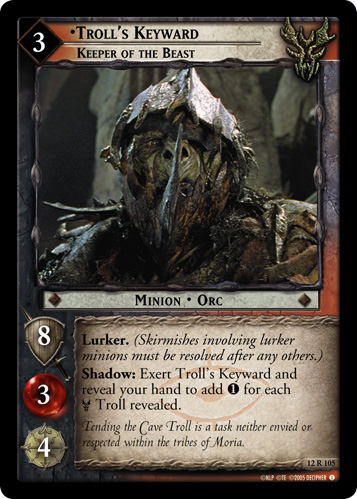 . By including many (often 20+) troll minions in your deck and using a Free Peoples side with strong filtering, you can reveal a whole hand full of trolls, generating enough Twilight to play those trolls. Typically this deck plays Fierce, Damage +1 trolls like Ordnance Grunt (13R117) 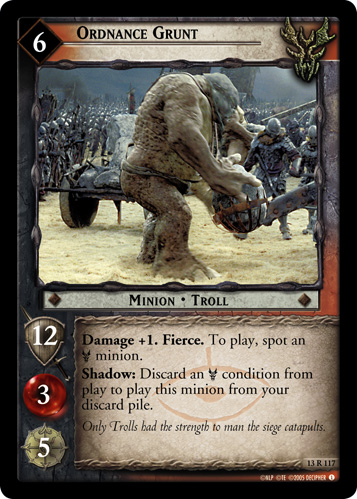 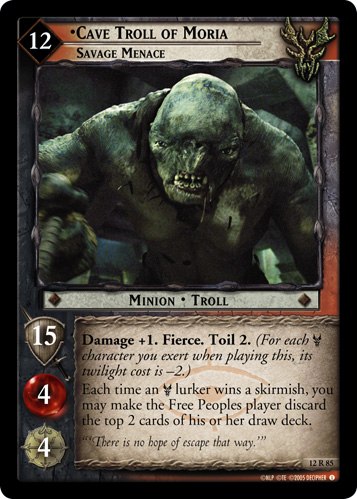 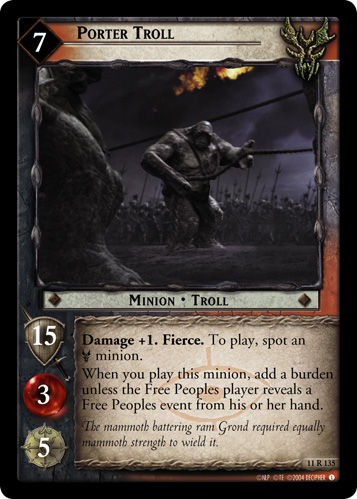 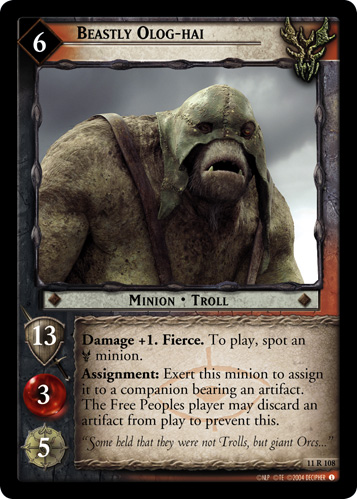 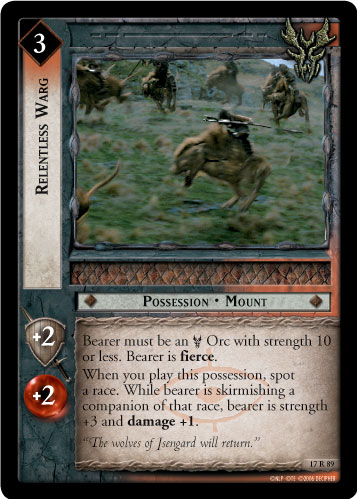 to get extra uses out of the Keyward, and cards that can recur the Keyward and his warg like Goblin Hordes (11R123) 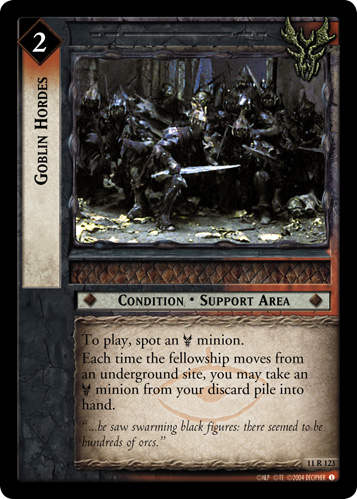 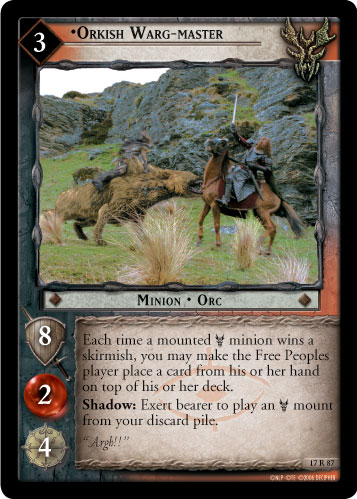 Mountain Troll Swarm is a swarm strategy, although not properly a deck of its own. It plays a swarm of cheap orcs, often with exertion abilities or abilities that activate when they come into play, then uses Mountain-troll (15R112) 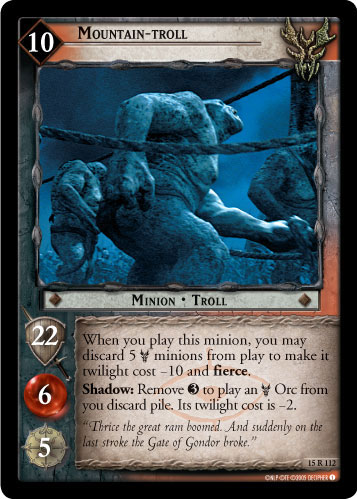 to discard and recur all of them. This strategy works with many other 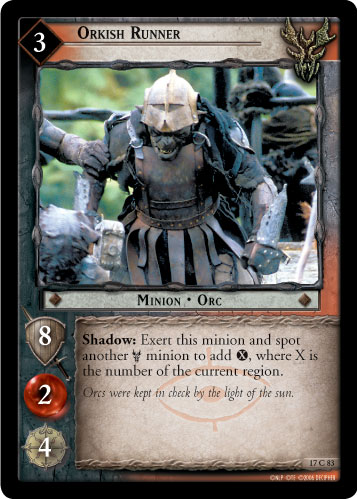 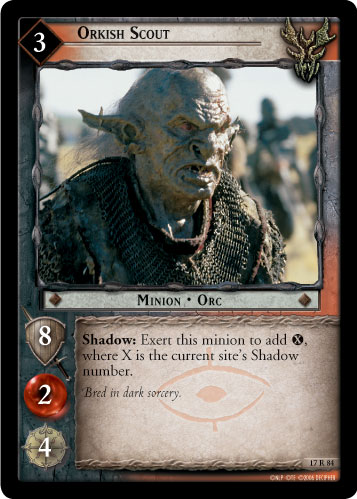 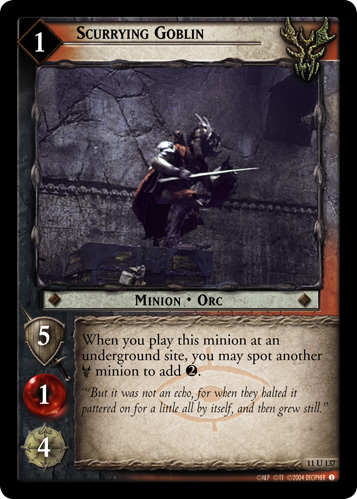 , then supplements them with Warg possessions and cards that replay wargs. Mountain-Troll also works well with decks featuring Demoralized (11U114) 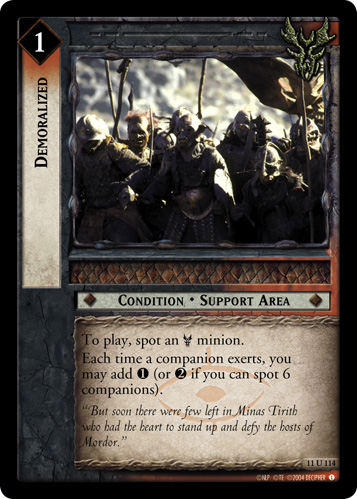 , which play and replay minions that exhaust companions (chiefly Pitiless Orc (12U99) 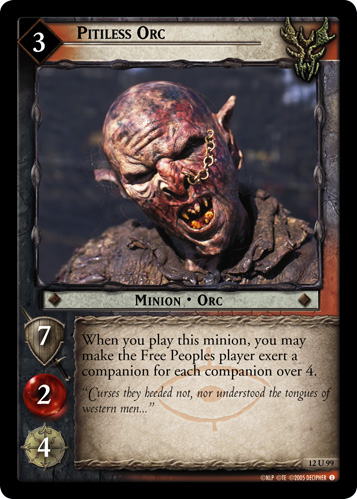 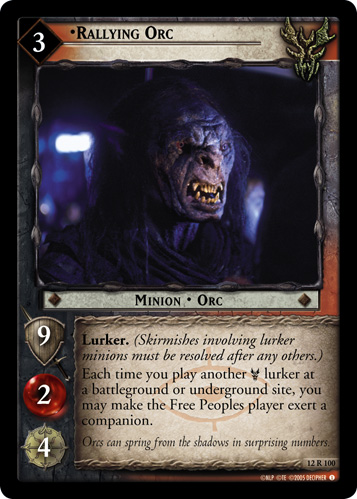 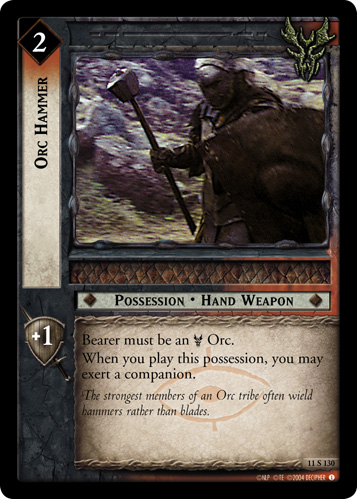 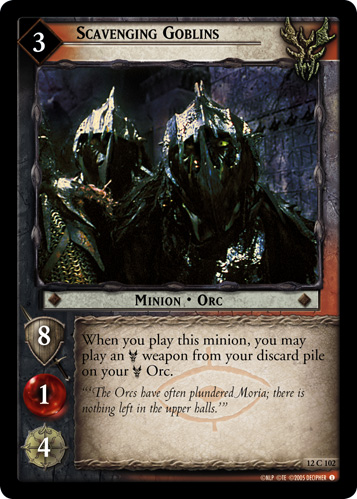 ) to either supplement a direct wounding strategy, an archery strategy, or simply to set up a huge unbeatable swarm. Mountain-Troll is also a common addition to Lurker orc decks, which plays efficient swarms of Lurker orcs that all buff each other.

Trolls are a separate race from Half-Trolls in this game. Cards that apply to "trolls" do not also apply to half-trolls.

List of Cards that Interact with the Troll Race[edit]