When LotR TCG began, there was only one format: the cards that existed. With the release of The Two Towers, Decipher split the game into three formats:

Even as Decipher left Fellowship Block behind, players did not: it has long been one of the most popular formats in the game and received continued support in organized play during the game's lifespan. This popularity has attributed to various reasons over the years. Thematically, the notion of two sanctuaries doesn't fit as neatly in other formats -- the second "sanctuary" along the Towers and King site paths are in the middle of sieges, and after that it isn't tied to any particular location at all. Without the mechanics Decipher introduced as the game went on, the core gameplay is simpler and a greater focus. Strategies like Choke and multi-cultural Fellowships were almost unavoidable in Fellowship Block but heavily toned down or penalized in later formats. Perhaps most of all, the new cards took the game in new directions (called either balancing or Power Creep depending on the speaker) which changed how the game needed to be played even for strategies such as

Moria swarm which saw no new cards. In the end, all of these simply describe the nostalgia of how the game began in contrast to the major changes that Towers block in particular brought.

The simplicity and popularity of Fellowship block make it an ideal starting spot for new players, a unique quirk compared to most TCGs where the latest and most expansive version of the game is the only way to play. Decklists can be found at this subforum of The Last Homely House.

Decipher's continued support for the format also meant it was under their continued sovereignty, which on two occasions changed the official Fellowship Block from what it had been historically. First was after the release of set 9, where the new alternate Ring-bearers tipped the scale for Decipher to ban Ring-bearer skirmish cancelling in all formats (something which they had been moving away from since Fellowship Block anyway). Soon after the release of set 11 came the birth of the R-list, which included Forces of Mordor (1C248) 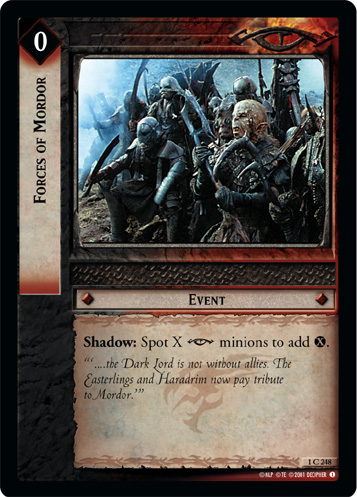 as one of the cards restricted to just one copy for Open and all block formats. Therefore, there are technically two "versions" of Fellowship Block: the original format played during the first year of the game's lifespan, and the tournament format of later years.