King Standard (short for Return of the King Standard and sometimes called RotK Standard) is a historical format that includes all of the sets up to the seventh set, The Return of the King. It's a snapshot of Standard immediately before the release of Siege of Gondor in March 2004. As such, it includes the first two waves of additions to the X-List, and uses the King Block site path, albeit without the sites from Siege of Gondor or Mount Doom. Ring-bearer skirmishes can be cancelled in King Standard as that rule had not yet been introduced, though Curse Them (4C113) 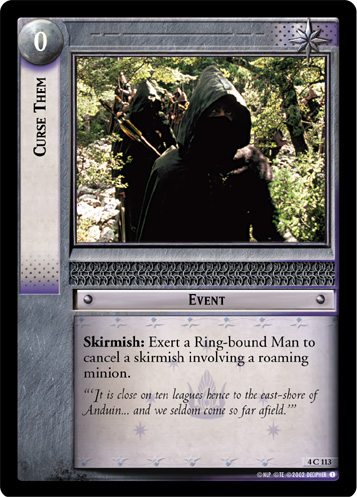 is the only legal card capable of doing so. The format is not particularly popular, supported mainly on GEMP and The Last Homely House forums. Still, the French community (one of the few groups to still meet regularly and play the game face-to-face) used King Standard for their 2021 tournament.

Decipher's Standard format was constantly evolving, and unlike block formats there was no official support for past incarnations as new sets were released. King Standard is one of several historical standard formats supported by the community, but unlike others the snapshot comes in the middle of a block rather than at the end. Due to the naming convention it is often confused with the far more popular (though somewhat oddly named) Movie Block, which includes the first ten sets and is the Standard format prior to the release of Shadows. mLOTRO uses what might be the expected nomenclature, with "King Standard" referring to Movie Block.

Its advocates feel that set 8 in particular suffered from unacceptable power creep, and that - like players who prefer Fellowship Block or the Towers formats - it is the last point before the game took a sharp (and mostly negative) turn away from what it had been. Set 10 is often cited as further evidence -- only format changes saw more additions to the X-list than during Mount Doom. Set 9, meanwhile, brought First Age characters into the Third Age setting of the game and Alternate Ring-bearers, substantial shifts from the established narrative and gameplay even before evaluating the relative power of the cards themselves.

The following cards cannot be included in King Standard decks, with new additions to the X-list noted with the reason. For more details, see X-list.