With the release of The Hunters, War of the Ring Block officially became a legacy format. However, while the subsequently released sets followed the scheduled pattern of 3 sets (as seen on the promotional The One Ring (4M1) 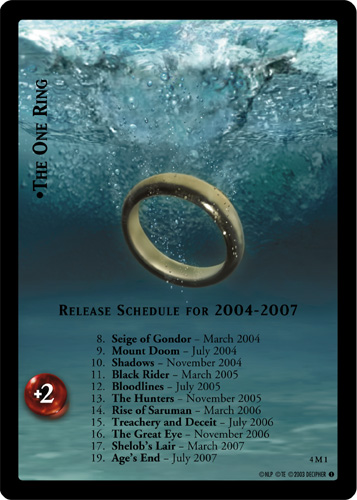 ), Decipher as a company was rapidly dwindling. Between missing release deadlines for over half a year and releasing fewer and fewer official communications, the new block had very little official structure compared to years past. Dubbed Hunters Block after its inaugural set, the block is more known for its shortcomings than anything else, and the poor quality of the final two expansions (Rise of Saruman and Treachery & Deceit) make the block only technically playable.

Uniquely among all base sets, starter decks from the era included sites from sets 11-13 and there were only 8 sites in all of set 15, meaning that at the time of its release there was no way to actually play with a pure Hunters Block site path. Set 17 brought 4 more sites which made it possible to build a deck solely within the "block," although players would still have to rely on booster packs to get them. It is not known whether the Shadows site rework was always intended to do away with the traditional notions of "site blocks" from the movie years or this was merely yet another oversight as the wheels fell off the company.

Sets 17 and 18 also had the most limited print run of any other sets, compounding their issues. In addition to the limited availability of boosters from sets 17 and 18, the Uruk Rampager Starter Deck included 5 copies of White Hand Guard (17C126) 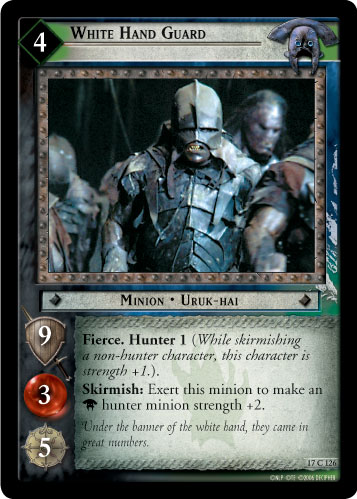 and only 8 sites, failing to give players the cards necessary to actually start a deck. No starter decks were produced in time for the release of set 18, the only expansion set without one at all.

Beyond the production issues, the sets in Hunters Block themselves are often cited as the most egregious power creep in the game's lifespan. Players who enjoyed Standard or Expanded before its release had little choice, though -- unlike Movie Block, legacy versions of those formats were not supported by Decipher after their time ended. Anyone who wished to continue playing in official events had to either play War of the Ring Block and leave behind their cards from sets 4-10 or play the new Standard and Expanded formats which included Hunters Block sets (and Standard rotated out sets 4-6 anyway). The Hunter keyword is among the most infamous additions, which many viewed as explicitly elevating the new characters above those from every prior set. However, the unrelated text which accompanied those cards drove most of the power creep itself.

Decklists can be found here at this TLHH subforum.