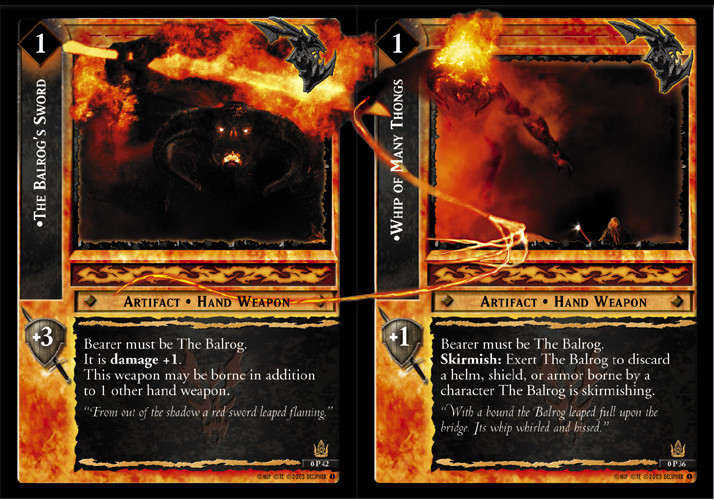 Things to notice about the visuals: the golden King Block symbol in the lower right, the fiery template rather than the standard

Moria one, and of course the visuals in these cards both popping out of frame and in this case even "overlapping" onto one another.

The Countdown Collection distributed during the Countdown to the King was a set of 22 cards produced as a lead-up to the release of The Return of the King, both the card set and the movie. 4 of these cards (0P50 - 0P53) were so-called Book Cards, representing concepts from the Lord of the Rings books which did not make their way into the Peter Jackson films, such as Tom Bombadil. The other 18 cards (0P30 - 0P47) were historically iconic cards with brand-new culture template art, and some made to "pop-out" of the frame.

Countdown to the King Promotion[edit] 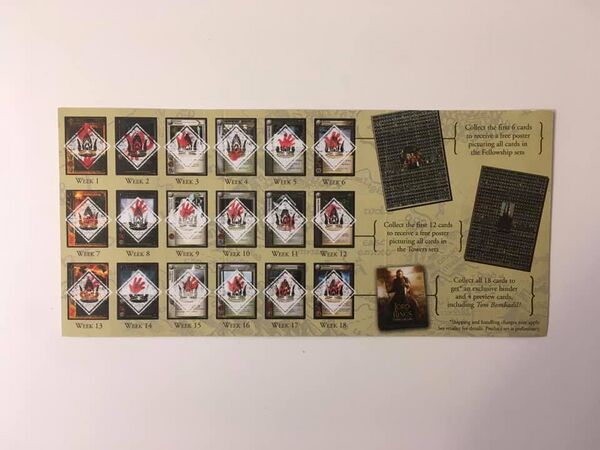 The stamp card issued the first week that players participated in the promotion.

The Countdown to the King promotion was ran by Decipher over 18 weeks from August 25th to December 29th, 2003[1]. For each week of the Countdown, purchasing $10 (or €10) of booster packs from Fellowship Block and/or Towers Block from participating retailers would earn players that week's associated card. In addition, collecting the first 6 cards would earn you a poster depicting all the cards in Fellowship Block, and collecting the second 6 cards would earn a similar poster depicting Towers Block. Players who managed to collect all 18 cards over all 18 weeks would additionally earn the four Book Cards and a collectible binder with enough space to hold the 18 Countdown cards.

Beginning in October 2003 (during week 8 of 18), the Countdown Collection was also offered directly from Decipher's online store [2]. Doing so would cost the same as it did to participate weekly ($180), and would include the following:

The Book Cards did not ship until May 2004[3]. This is at least partially due to the Weta trip happening in early 2004.

The card templates used by the 18 Countdown cards were created specifically for this collection, and were originally intended to be exclusive to it [4]. This exclusivity didn't last, however, as the art was later repurposed for the Legends Masterworks cards released in each set starting with set 12, Black Rider. There are some differences between the two sets of templates, most obviously for the Shadow cards (which have white text on a dark background for the Countdown and a more standard black text on light background for Masterworks), but also including minor alterations to the trim of various regions on the cards.

The Countdown Collection can be distinguished from Masterworks by the golden King Block crown icon in the lower-right-hand corner, just above the Collector's Info. Masterworks have no symbol there (unless they are also a Weta card). 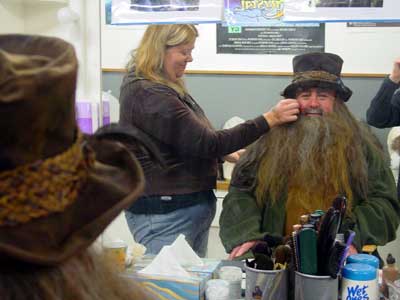 The Book Card art subjects were all produced by Weta Workshop, the same special effects crew that worked on the films. Dan Burns, then Creative Director at Decipher, traveled to New Zealand and worked with Weta to produce the images used by the four Book Cards of this release and several others that were later introduced into the game, including The Weta Collection. In some cases the exact props used in the films were re-shot for later compositing, and in other cases concept art for characters that were planned at one point were consulted and the characters recreated with the same attention to detail used in the films. Many of the costume pieces involved were re-used where appropriate -- Tom Bombadil's cloak is a worn version of Gandalf the Grey's cloak, for instance.

Click through to any image to see its full resolution.