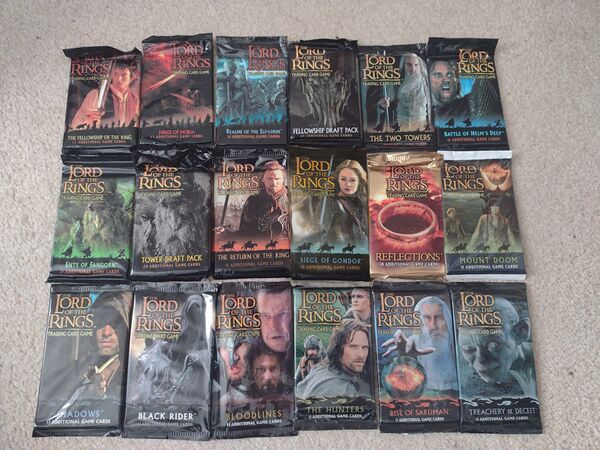 One of each of the booster packs produced over the course of the game's lifetime.

Booster Packs were the primary distribution method for cards in the Lord of the Rings TCG. In this game, boosters are randomized packages of 11 cards -- 7 Common (C), 3 Uncommon (U), and 1 Rare (R), with caveats for each major era.

During Movie Block (the first 10 sets), each card had two versions: standard and Diffraction Foil. Foils were inserted randomly into booster packs, replacing one of the Common cards. In The Fellowship of the Ring set (and presumably for all movie-era sets), the odds of which card was inserted as a foil varied based on its rarity, which was as follows[1]:

Each of these chances was calculated independently, which results in each booster having a ~17% chance of having at least one foil, which is about 1 in 6. This 1 in 6 chance is what Decipher advertised on its website, promotional material, and on the booster wrappers themselves.

In The Fellowship of the Ring and The Two Towers, boxes of Draft Pack product were also produced. Each of these packs had 29 cards and were themed around batches of cards--there would be runs of 5-10 cards common to a single culture in a row. Each pack had 1 rare, but the remaining distribution is uncertain. These packs were intended to be used during draft events (and to offload extra printed product).

Reflections booster packs were a different beast, containing 18 cards apiece and largely being used as a vehicle for dumping excess print stock from earlier sets. The 52-card Reflections set contained 26 Rare and 26 Rare Plus (R+) cards, with each booster breakdown as follows[2]:

In addition to the standard distribution above, some packs (at an unknown rarity) were so-called God Packs, where every card included in the booster was an overstocked foil. It's difficult to pin down how many of these existed, but they are well-attested by the community. They can't have been more common than 1 in every 20 boxes or so, and possibly rarer.

With the release of Shadows, the parallel foil sets were discontinued and replaced with the concept of Rare Foils (RF), a.k.a. Legends cards. Rare cards were randomly replaced with one of 18 RF cards selected from among the set's most iconic cards. With the release of Black Rider, this system was expanded to also have a chance of instead replacing the Rare with a Legends Masterworks card, which was one of the RF cards treated with alternate template art. This art was originally developed for The Countdown Collection and was modified slightly to be used here.