The War of the Ring Anthology 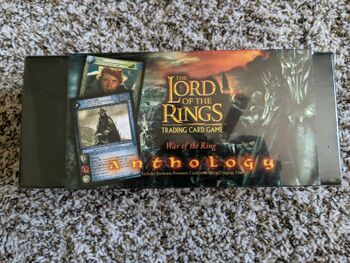 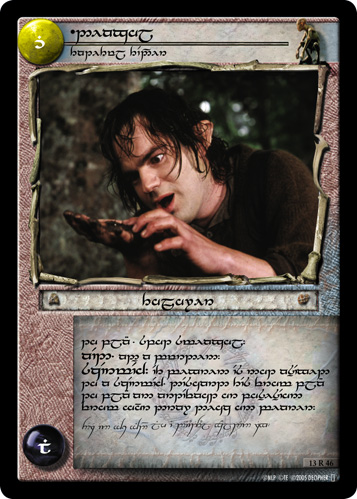 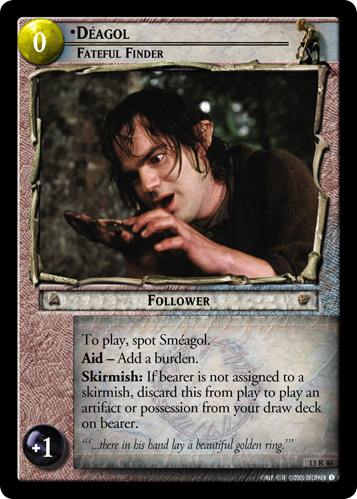 There is a dip in craftsmanship in the WOTR Anthology compared to those of previous blocks. The most obvious difference is the lack of any included booklet, which is no doubt a direct result of the layoffs at Decipher leading to fewer employees available for design and proofing.

There is also a change in the quality of the Tengwar itself, which appears to have gone from being hand-lettered to utilizing a static font, as can be demonstrated by a close inspection of Aragorn, Ranger of the North (1R89T) 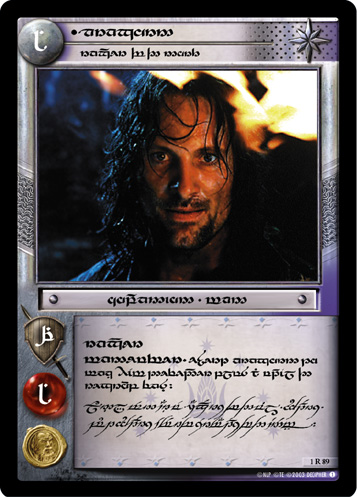 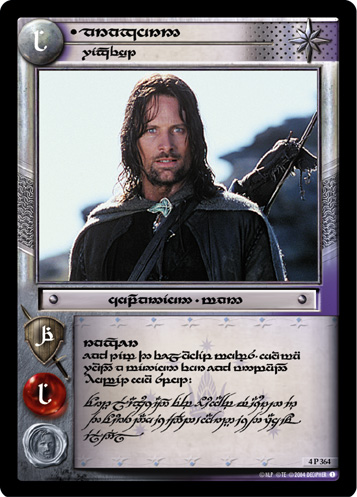 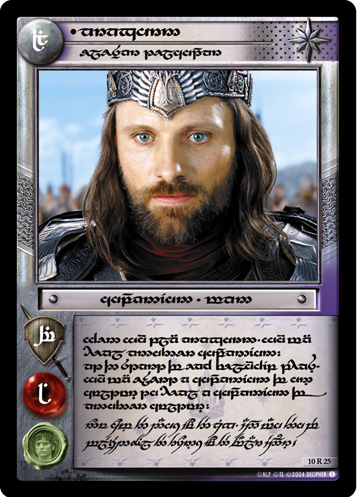 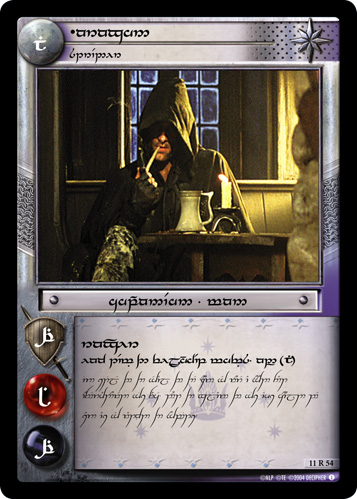 . Here are those cards titles together (in order) for comparison:

Each of the previous blocks have clear variations between the different letters of "ARAGORN", even between the two As and two Rs of the same card. Note the differences in shape and the length of the leading strokes, which are evidence of being made by hand (albeit by a skilled calligraphist).

The Strider entry however lacks any sort of variation between letters, and the glyphs are spaced to avoid overlap. It's unknown where exactly Decipher obtained the font being used on these cards (it might even have been Reeve himself), but it clearly wasn't made by hand as was previously the case (and indeed, no mention is made of Reeve in the above announcement for this particular Anthology).

This wouldn't be anything more than a curiosity, except that it resulted in two different versions of WOTR Tengwar cards:

German Version of the War of the Ring Anthology[edit]

German Tengwar cards for the first three Anthology sets were exactly the same as all other languages--namely, the same as the English version (there wasn't much point after all in re-transcribing a language that, realistically, practically no-one could read). However, the German War of the Ring Anthology are in fact transcribed in German, unique to all non-English language tengwar cards.

The German Tengwar cards are noticeably more amateur than the hand-written ones made by Daniel Reeve. The mode used doesn't appear to follow any known Tengwar mode, meaning that the authors likely just assigned letters to tengwar at random. There is also a curious combination of vowels-as-glyphs and vowels-as-diacritic, possibly indicating that diacritics were used as direct translations of German diacritics. On top of this, the lore font appears to have some missing letters, meaning that at times it will default to the game text font's letters, causing a jarring formatting switch partway through words.

Seeing as these cards were only "discovered" to exist in 2020, it's unknown whether any other overseas printers produced their own versions as well.

Notice the missing letter in the lore, which is both times replaced with the glyph used for the number 7 from a separate font. Although these do not use any existing German modes, they are presumed to be German based on the verbiage used. Note the word used in the type bar, which follows a pattern of 1 - 2 - 2 - 1 - 3 - 4, which would line up with an amateur transcription of the German word "effekt", the term used for Condition.

It is completely unknown why these cards were transcribed, but the method at least can be guessed at: since this Anthology was the first to utilize a font instead of hand-lettering (see previous section), that font must have been transmitted to Decipher's international partners, and the German distributor must have decided for one reason or another to use these to re-write the cards from the ground up in a German-ish mode.

Tengwar Cards Included in The War of the Ring Anthology[edit]