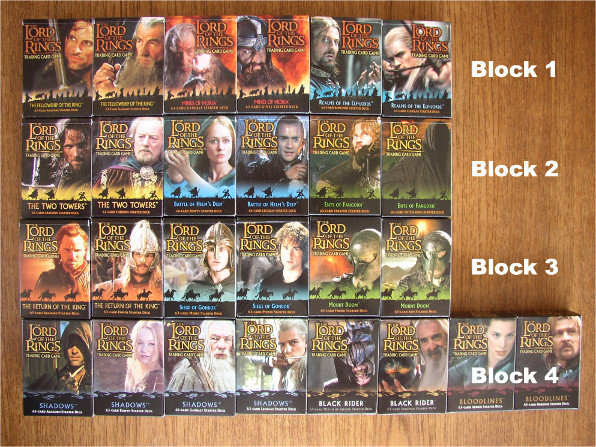 Starter Decks are ready-made simple decks that are intended to be easy enough for brand-new players to pick up and play. Each set typically had two starter decks, each one focusing on different cultures and strategies, so one could conceivably purchase both with a friend and get a good taste of what the game as a whole had to offer.

Unlike actual legal decks, starter decks only have about 50 cards, and the Shadows and Free Peoples sides did not always have the same number of cards. Combined with the fact that the starter rulebooks don't explain all of the rules of the game (but only rules needed to play the decks provided, plus a starter-only rule that allowed you to reshuffle the discard pile), the decks themselves are mostly valuable from a learning perspective but not very usable in a normal play environment.

To offset the fact that veteran players would not need the starter packs, Decipher included 2 nonfoil P-rarity cards in each starter pack that were not obtainable in booster packs. Also, for most sets, Decipher packed 3 random rares with each starter deck, giving collectors additional reason to purchase them (it was sometimes cheaper to buy boxes of starters instead of boxes of boosters, as each boxof starters included 36 rares.) In Battle of Helm's Deep and Ents of Fangorn, Decipher did away with the random rares and instead included 3 predetermined rares, with the idea being to make sure that included rares went according to the theme of the starter deck (predetermined rares also saved printing costs, as it allowed the entire deck to come from one print sheet instead of two.) Fixed rares annoyed players, as it removed the incentive for veterans to purchase the decks, and it drastically reduced the value of the 6 rares affected in each set. With The Return of the King Decipher reverted to the original random rare distribution for starter packs.

For The Fellowship of the Ring and The Two Towers, Decipher also released Deluxe starter sets, which besides including a starter deck also had booster packs from each set in that block as well as a card boxand glass tokens. Unlike other starter sets, Deluxe starters did not include starter-only cards. Due to the inclusion of boosters, a Deluxe Rulebook was included in lieu of the Starter Rulebook, to make sure that players would have access to all the rules if needed. No Deluxe Starter Set was released for any other block.

Starter decks that were included in the Lord of the Rings Online TCG game client had their lists modified to make the decks tournament legal. In most cases, this just meant adding more cards to the list, but in some cases in The Return of the King starters they also removed cards in a rebalancing attempt. In one notable case, Kill Them Now (4C156) 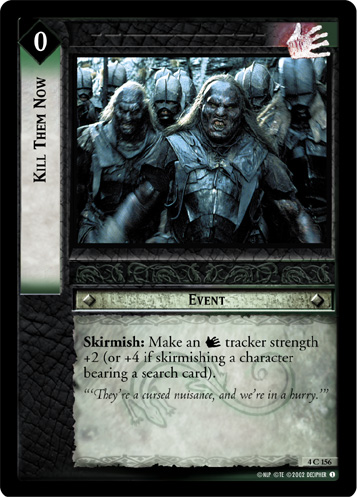 was removed from the Ents of Fangorn Faramir starter deck, as there aren't actually any Trackers in that deck to use this card with (it was replaced with Ferocity (4C151) 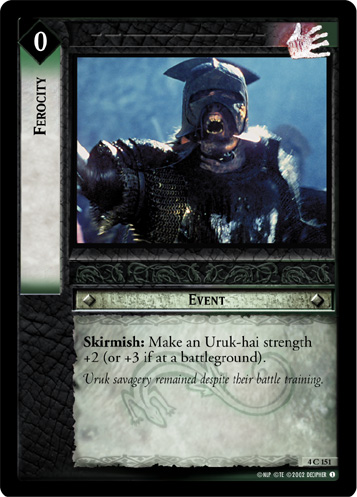 As the starter deck lists are too large to all include on a single page, they have been divided up on a page per block. It should be reasonable to pit any deck from a given block against any other deck within that block, though it's usually best to pit them against their mate within the same set.

The decklists below indicate the actual cards that were included with each physical box, warts and all. Any alterations made by the corresponding LOTRO list are indicated with strikethrough for removals and bold for additions (in their own section at the end).