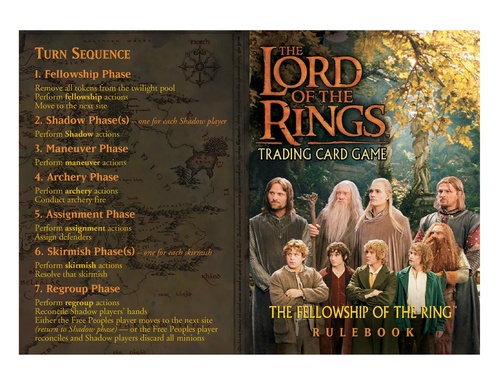 In the Lord of the Rings TCG, Rulebooks were collections of, well, rules that outlined both general and specific guidelines of how the game was to be played. There were several different types of rule documents:

All physical rulebooks were also distributed online as PDFs, but old versions tended to be removed shortly after they were superseded by a subsequent edition. As a result, there are holes in the digital record, and not all rulebooks which were physically produced exist here.

If you have any files not listed below, please help us complete our collection! Upload them here, or contact the PC at the PC Discord server here.

Some of the documents Decipher distributed have been converted to wiki articles for convenience when linking and sharing (and arguing over rules). These are below:

All of these documents (except for 4.1) are available for download in their original PDF version in the appropriate section below.

There was one Starter Rulebook for each set that included a pared-down explanation of game rules, which focused on covering the mechanics pertinent for the cards included in the Starter Decks for that set. Starter rulebooks remain a good starting point for new players, but be advised that some of the rules were simplified for use of those decks. For instance, these rules permit that if a player ever runs out of cards in their deck, that player can reshuffle their discard pile into a new deck once per game, a concept that has no equivalent in regular constructed play.

Starter Rulebooks were of course produced for each language in which the game was printed, same as English. However, far more of these translated rulebooks are missing, and it's unknown if their PDFs were as regularly released online as their English counterparts.

Interestingly, a couple languages appear to have had rulebooks translated that never actually printed cards (beyond promos):

Deluxe Rulebooks were released with Deluxe Starter Sets, which themselves included a Starter Deck and Booster Packs, so conceivably the new purchaser could have any card from that particular set. The Deluxe Rulebooks therefore covered more ground than their Starter Rulebook counterparts.

The Deluxe Rulebook for The Fellowship of the Ring called itself an Expanded Rulebook.

As before, this rulebook was also translated into other languages as needed (including, curiously, a Finnish version).

It became quickly apparent following the official release of the game that the Starter and Deluxe Rulebooks glossed over quite a few facets of the game, which is indeed a problem with TCGs in general: since there are so many cards, and so many combinations, not every potential issue can be discovered through playtesting alone. Decipher therefore began releasing a Frequently Asked Questions document on their website that covered problems as they cropped up.

At first, the FAQ documents only held clarifications (such as "the discard pile must be face up") that were not explicitly stated in the first few versions of the starter rulebooks. With the release of The Two Towers and the new Standard and Open play formats, it became necessary to maintain an X-list and R-list of banned or restricted cards, and so the latest changes to these lists also became the domain of the FAQ document.

Eventually the FAQ document was renamed to clarify its own usage, becoming the Current Rulings Document. It still held to the same regular updates as before, and in between Comprehensive Rulebook releases (see below), the CRD held the latest and greatest updates to the rules of the game. Whenever a new Comprehensive Rules was released, the content of all previous CRDs was reprinted inside, making the old documents obsolete.

Some of the CRD rulings were released after the Comprehensive Rules version 4.0, and so never made it into an official release of the Comprehensive Rules. This means that the most recent version of the CRD was released 13 August 2007, and represented the very final word that Decipher ever released concerning game rules. All of the known FAQ and CRD documents are linked below, and a wiki version of the most recent (Aug 2007) can be found at Current Rulings Document.

As the game matured, Decipher of course found themselves making more and more varied rulings over specific card wordings, combos, or mechanics. Sometimes a card would need to be reworded, clarified, or in some circumstances even modified from its original form (called thereafter an errata). Other times the rules themselves would have to be altered to fix issues only discovered (or fully respected) after a set's release.

With the release of the Two-Player Trading Card Game product around the release of The Two Towers, Decipher released a more exhaustive rulebook that was a combination of the Starter Rulebook, Deluxe Rulebook, and all the card erratas and rulings. Paired with the QuickStart Tutorial CD-ROM, this rulebook was dubbed the QuickStart Tutorial Rulebook on the front cover, although the pages of the manual called itself the Comprehensive Rulebook. Unlike starter rulebooks which were the size of a standard card (3.5" x 2.5"), the QuickStart manual was 7" x 5".

With the release of The Return of the King, the Comprehensive Rulebook was updated to include all information released in the FAQ documents, and Version 2.0 of the rulebook was born (it was at this time that the FAQ document was rebranded the CRD as well). Thus combined with the CRDs, this rulebook became the be-all end-all for card rulings that could be referenced during high-end tournament disputes.

Version 3.0 was released sometime around Reflections, and version 4.0 shortly before Shadows. Version 4.0 was the last version officially released by Decipher, and from that point on it was the job of the Current Rulings Documents to contain any further rulings after that point. A Wiki version of version 4.0 can be found at Comprehensive Rules 4.0.

Some details of structured play that were more about ensuring fair play than specific mechanics were compiled into the Official Tournament Guidelines. This includes things such as draft procedures, pairing instructions, playtime length, and other details that for non-tournament play were usually up to gentleman's agreements between the players. This document's rulings were never incorporated into the Comprehensive Rules due to their ancillary nature. A wiki version of this document can be found at Tournament Guidelines

One notable ruling concerns the practice of performing a Mulligan on your opening hand, which has since been widely adopted for casual play by the community.