The Return of the King Anthology 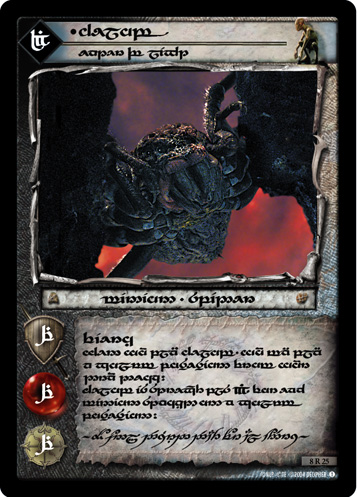 A Tengwar version of Shelob, Eater of Light (8R25) 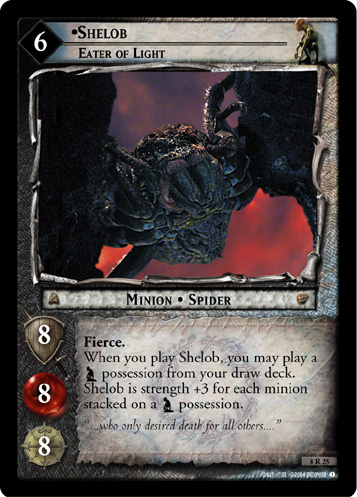 Decipher is pleased to announce the third in a series of anthologies based on The Lord of the Rings™ TCG. Similar to the popular The Fellowship of the Ring and The Two Towers Anthologies, The Return of the King Anthology will include 17 King block cards reprinted in the Elvish Tengwar alphabet.

These 17 cards, hand-lettered by noted New Zealand artist Daniel Reeve, are sure to be a collector's delight. Reeve, the official calligrapher and cartographer of The Lord of the Rings movies, has beautifully rendered the same Tengwar symbols used in the films and seen on such works as the inscription on The One Ring and the pages of The Book of Mazarbul.

In addition to the 17 Tengwar cards, the King Anthology will contain one random King Block Starter Deck, ten Booster Packs (five The Return of the King, one Mount Doom, and four The Lord of the Rings Reflections), and a booklet with a comprehensive card list of all King block cards and English text for the Tengwar cards. The set will be housed in a sturdy collector's card box with a capacity of over 600 cards. The King Anthology will be available October 20, 2004, at a SRP of $39.95.

Seek the 18th Tengwar card to complete your set! Details are included inside the package.

The Tengwar Version of •Anduril, Flame of the West[edit] 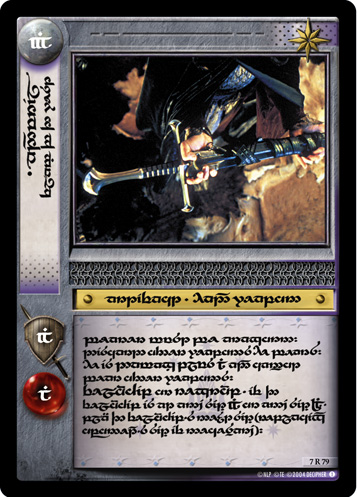 Tengwar •Anduril, Flame of the West.

The Tengwar version of Andúril, Flame of the West (7R79) 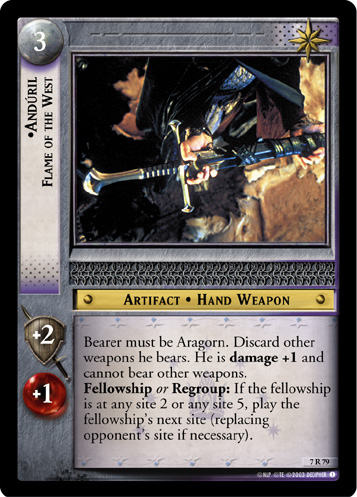 is the only King Block Tengwar card not included the The Return of the King Anthology. Instead, Andúril, Flame of the West (7R79T)

was available from the Deciper Rewards Store. [2].

Tengwar Cards Included in The Return of The King Anthology[edit]