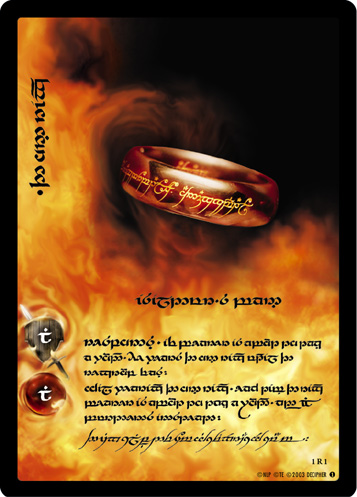 Within the LotR-TCG, special promotional cards were released with all text written using this script. The text was hand-lettered by noted New Zealand artist Daniel Reeve, the official calligrapher and cartographer of The Lord of the Rings movies. His work includes the text shown on the inscription of The One Ring and the text within the pages of the Book of Mazarbul.

Most Tengwar cards were released in 18-card batches called Anthologies, which were released one per 3-set Block (Hunters never got one due to Decipher's decline). A handful were released as special event rewards or promotions in between anthology releases.

Tengwar cards were legal to use in sanctioned Decipher tournaments and were considered identical to their English counterparts for gameplay purposes.

German Tengwar cards for the first three Anthology sets were exactly the same as all other languages--namely, the same as the English version (there wasn't much point after all in re-transcribing a language that, realistically, practically no-one could read). However, the German War of the Ring Anthology are in fact transcribed in German, unique to all non-English language tengwar cards.

The German Tengwar cards are noticeably more amateur than the hand-written ones made by Daniel Reeve. The mode used doesn't appear to follow any known Tengwar mode, meaning that the authors likely just assigned letters to tengwa at random. There is also a curious combination of vowels-as-glyphs and vowels-as-diacritic, possibly indicating that diacritics were used as direct translations of German diacritics. On top of this, the lore font appears to have some missing letters, meaning that at times it will default to the game text font's letters, causing a jarring formatting switch partway through words.

Seeing as these cards were only "discovered" to exist in 2020, it's unknown whether any other overseas printers produced their own versions as well.

Tengwar as a writing system is not inherently tied to any one spoken language, and as a result has many "modes" which define what each letter is to be interpreted as. Daniel Reeve, the Weta calligraphist, used his own mode which is close but not identical to the standard English mode, with vowels as full characters instead of diacritics. As a starting point, compare it to the "Westron Orthographic" mode as described on tecendil.com.

The character differences are as follows:

Most of these differences are a matter of eliminating redundancies, both of the same pronunciation in multiple letters, and different pronunciations with the same letter representations, reducing the total amount of work to convert English into printable Tengwar.

In addition, the following rules can be observed in the printed mode: