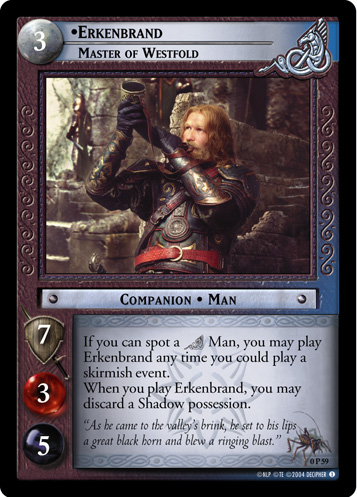 Erkenbrand's role in the films was replaced by Eomer, but there's no reason to sleep on him!

The Weta Collection refers to a specific set of promotional cards earned by players during a promotion in summer of 2004. Similar to the Countdown to the King promotion, players could earn one new Weta card per week by purchasing booster pack product from participating retail stores.[1]

Rather uniquely among standard legal Promotional cards released in set 0, the cards in the Weta Collection were not "preview" cards, which is to say that they were never reprinted "for real" in a later set. Thus, many formats that aim to include Movie Block-era cards tend to carve out an exception to explicitly mark 0P56 - 0P60 as legal. The blank versions of the Customizable League Cards are the only similarly-orphaned promotional cards.

Like The Countdown Collection, these cards were produced from collaboration from Weta Workshop, the special effects team that worked on the films. See Weta Cards for more information on the design and development of these images.