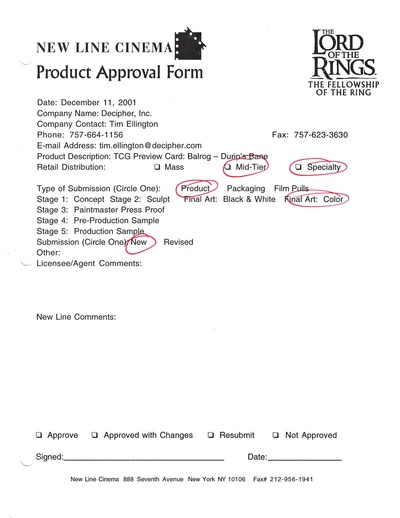 An example Product Approval Form included with each fax which would be filled in by New Line agents in the reply.

The New Line Fax Proofs are a set of faxes sent back and forth between Decipher and New Line Cinema between December 2001 and February 2002. They are an absolute gold mine of insight into the development and approval process that Decipher went through, specifically for the Mines of Moria set but also for other product (both released and rejected) that was in development during this time period.

How the faxes avoided the dumpster is a mystery, tho they certainly must have originally been rescued by a Decipher employee before making their way out onto the market. They traded hands a few times and were eventually sold on eBay around 2018 and purchased by Kreg Miller, who has graciously provided scans of them here.

Due to the nature of Intellectual Property (IP) license agreements, licensees (such as Decipher) are not permitted to use the IP for literally anything they want--everything must be approved to a greater or lesser degree, depending on the specifics of the contract. In the case of Lord of the Rings, New Line scrutinized text formatting, lore quotes, portrait choices, portrait presentation, and even the coherency of the product packaging.

This is done in general to ensure that careless licensees do not cheapen the IP, and is also done to uphold agreements with actors and actresses in the film itself, who would have no doubt included clauses in their own contracts that specified that merchandise was likewise not to cheapen their own images. This last point resulted in New Line scrutinizing card portraits, and some were rejected due to unflattering presentation or the usage of stunt doubles (especially size doubles for the hobbits).

All of the fax proofs were packaged together, meaning that unrelated faxes were shuffled among each other. Some of the faxes lack one or the other of Decipher's request or New Line's response, while others appear to be the end of an otherwise missing heated back-and-forth.

The full scans can be viewed here:

Each conversation in the fax dump has been extracted into its own article for more in-depth analysis. These articles are as follows: