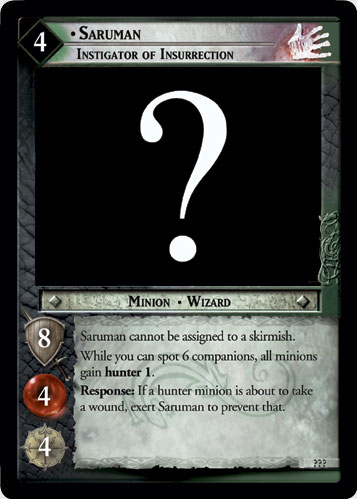 The teaser for Saruman used when announcing the winners. Fun fact, this image was used as a 404-card-not-found image on TLHH for quite some time.

On 9 November 2005, World's Apart announced a Design-a-Card Contest in conjunction with Decipher[1]. Players would have one week to design and submit cards for a chance to have their card included in a future set, contingent on playtesting and design feedback from Decipher (and World's Apart). Eventually 6 cards were selected and ultimately printed in the Rise of Saruman and Treachery & Deceit sets.

Cards were submitted on the Lord of the Rings Online TCG forums as posts with a poll attached. Members of the forum had the full week + 2 additional days to vote and comment on submissions. Originally it was announced that 3 minions and 2 companions would be selected, but ultimately 3 of each were accepted. The specific acceptance criteria have been lost to time, but it was noted that the cards were to have a special focus on draft formats, so cards were presumably encouraged to work more-or-less standalone (i.e. not focused on combos or other strategies that would require a constructed context). In addition, it was mentioned that "Companions that help a wide variety of fellowships and minions that offer 'crowd control' effects will be preferred designs".

The top 6 candidates were selected by 22 November 2005[2] and released as Version A for all LOTRO members to playtest until 30 November 2005. Or at least, that was the original target date to finalize the design, but this deadline apparently slipped.

On 28 November 2005, Version B was released to playtesters with an accompanying blog post detailing changes as decided by Decipher[3]. These changes were patched into the game within a day and playtesting continued, eventually lasting longer than the original target date of 30 November.

The final recorded playtesting batch, Version C, was announced on 13 December 2005[4]. Entries by this point were fairly close to their eventually released counterparts, but about half of the cards saw their final version reverting back to Version B before release.

In addition to the above versions, the game text attached to the cards within the LOTRO game client suggests that at least one more version existed of Saruman (Version D?), which seems consistent with the blog post's observation that his skirmish restriction was a minor point of contention. However, it's unknown if this version was quickly put together before the final recorded release on 17 December (4 days after the blog post), or if this was a further iteration not announced in a way recorded on the Wayback Machine.

Below are each of the cards and all the revisions they went through. Although the initial announcement cautioned that subtitles would be subject to change, none of them apparently did.

In the end, for half of the cards (Gimli, Aragorn, and Lurtz) Decipher ended up releasing their final Version C revision, while the other half (Gandalf, Saruman, the Witch-king) ended up using the earlier Version B revision. Curiously, this seems to split the cards along set lines--all of the cards which ended up in Rise of Saruman use Version B, while all Treachery & Deceit cards used Version C. Did this mean that the cards were already off to print before Version C was created two weeks after the 30 November deadline for playtesting, or was it a coincidence?

None of the contest winner cards have lore on them, possibly due to the space being reserved in LOTRO for a credit line.