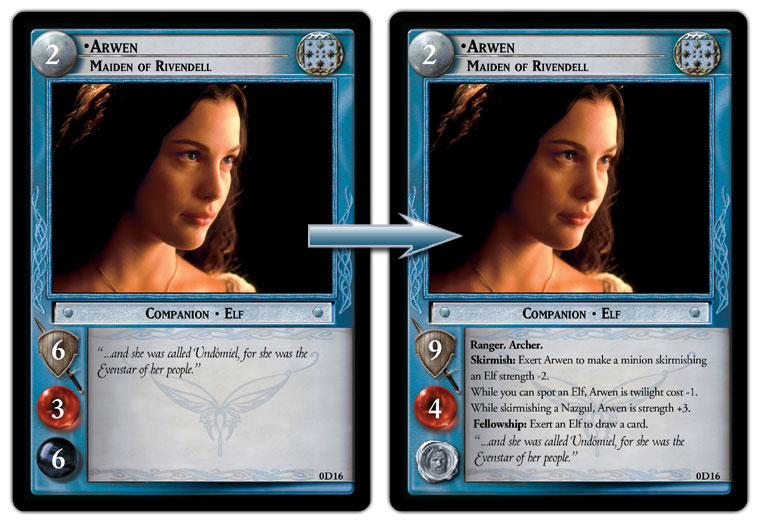 Image used by World's Apart in the lead-up to the release of Customizable League Cards.

On 11 December 2005, the Lord of the Rings Online TCG platform launched its league system for players to have the opportunity to participate in regular events, just about a year after publicly launching. The leagues were not just mirrors of their physical counterparts, however, as they incorporated gameplay mechanics that leveraged the nature of the digital platform, including the meta-path Race to Mount Doom modifiers as well as Customizable League Cards (CLCs).

Such league cards initially had a D rarity (for "Digital", not to be confused with Decipher's printed D for "DGMA Promo" rarity). Each card starts with no game text and basic stats, but as players earned League Character Points for participating in the league they signed up with, those points could be spent to upgrade the Customizable League Cards in their collection.

The Customizable League Cards were introduced before Shadows was launched, and so the Free Peoples cards do not deal with Resistance (except Frodo). In fact, the CLCs were apparently not legal to use in War of the Ring events and were restricted to King Block and earlier[1].

Although these cards are often ridiculed by modern players who never played in the era of LOTRO, the forum posts that remain on the Wayback machine seem fairly neutral on the subject, with neither complaints nor effulgent praise being dished out. This is stark contrast to the Triumph and Menace series of cards, which have plenty of surviving complaints of their random, swingy nature.

Points were earned on the following basis[2]:

Each character had 3 tiers of upgradable options, costing 1, 3, and 5 points apiece. Not all upgrades were at the same tier for each character, and some characters even split upgrades between multiple levels (Gimli for instance having a Strength +1 upgrade at each of the 1, 3, and 5 point levels). Originally there was also a 7-point tier, but all 7-point options were reduced to 5-point options at an unknown time[3].

Some upgrades could be purchased multiple times, most commonly Strength up to 3 times. There were also mutually exclusive upgrades, but these were limited to Signets; naturally you could only select one of the four available signets at a time.

Players could of course dump all of their points into one power card if they so chose, but they could also spread them around to multiple different characters as-needed. Any upgrades purchased for one card would apply automatically to all copies of that card in the same league, so upgrading 1 Arwen would upgrade all 4 you might have in a deck[4].

Physical versions of all the Free Peoples Customizable League Cards were eventually printed as 0P62 - 0P67, albeit very toned down with only 1-6 points of upgrades applied. Each physical promo was awarded to anyone who joined online leagues for a particular month in 2005. The participation months were as follows:

These physical promos are among the most elusive to gather nowadays, considering the (relatively) limited scope of who participated. Participation was likely partially impacted by confusion among players whether the promos would ever be legal in any format (as War of the Ring was just kicking off), and a general dissatisfaction with the power level of the cards.

There is some confusion regarding the D rarity applied to these cards within the LOTRO client. Initially this was established to mean (D)igital, but later cards physically printed by Decipher were for (D)GMA rewards, which could lead one to believe that each of these D-rarity cards were also printed. Add onto the fact that some of them were printed with a P rarity, and it's a right mess.

Later, it appears that World's Apart altered their internal naming scheme and referred to all digital-only cards with the rarity of W, presumably for (W)orld's Apart and to avoid the ambiguous D issue. This must have been done late in the platform's lifetime, however, as none of the website help articles were ever updated to reflect this information.

Most digital platforms (and physical ones, naturally) have not attempted to recreate the Customizable League Cards. They are not available on GEMP. However, they are available on mLOTRO in dedicated leagues.

Below you will find a table containing each of the customizable cards, their point structures, and variations. Note that the values below reflect the final versions of the cards in the most recent version of the Lord of the Rings Online TCG client, which are different from the various[11] blog[12] articles[13] posted[14] in the run-up to the League update.