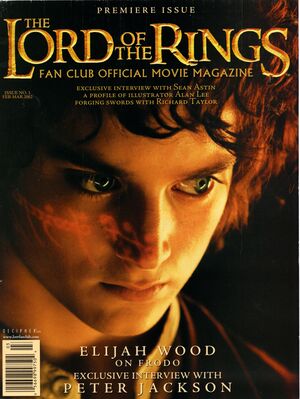 The Fan Club Official Movie Magazine was a magazine series produced by Decipher which was printed every two months between February 2002 and January 2005. It also included a "Hobbit-sized Edition" which was included with the extended DVD release for The Fellowship of the Ring in November 2002.

In early 2001 Decipher acquired FANtastic Media, a company which had created the official Star Trek and Star Wars fan clubs, and set up the Lord of the Rings fan club in turn. A website, message board, and online storefront were all used in an attempt to build up a long-lasting tight-knit community as had already been done for those other properties. Decipher went so far as to attempt to make this fan-community-running approach a part of its brand, as archived portions of the website record their attempts to push out into other properties such as Batman and The Simpsons.

However, this approach was unable to thrive with the rise of the Internet, where fans would themselves quickly and easily establish their own hubs without the need for official centralized guidance. Ultimately the Lord of the Rings Fan Club was shut down in early 2005, with the magazine ending its print run at the same time. Notably the Star Trek Communicator magazine (which had been ran by FANtastic Media for ten years, and had been in print in one form or another since 1979) also closed down just a few months later.

Each issue was 84 pages (including the covers) and contained several regular features including interviews, crew profiles, fan and celebrity news, and showcases for various product and merchandise. In particular, each issue contained an exclusive interview with Peter Jackson, and each issue also usually contained a similar interview with one of the main actors.

Much of the articles showcase behind-the-scenes elements similar to the Appendix features on the extended DVDs of the films. Eagle-eyed readers will also note that many of the "filler" images used throughout the articles to break up walls of text are in fact unaltered card portrait images used on various cards--evidence of crossover between Decipher artists and FANtastic Media editors.

As time went on, more and more of the page space became dedicated to ads or product showcases, which seems to underline the struggle the Fan Club was no doubt encountering to remain profitable.

Each issue has been scanned in at 600 DPI and uploaded to the PC fileshare as well as archive.org. File sizes range from 70-95 MB. The versions uploaded have been downscaled to 300 DPI for size concerns, but the originals are kept just in case they could be useful.

(If you just want to browse, use the archive.org link, as there is an in-browser PDF reader.)

Below is a table showcasing the content of each issue: