The Mirror of Galadriel (1R55) 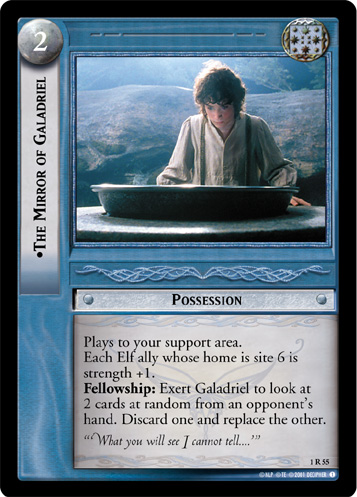 An Errata is an edit to a card's game text after its printing, usually to nerf a card with too much power or fix a broken looping mechanism. (Errata is technically plural, but nobody ever says "erratum".)

Decipher eventually issued about 25 errata over the course of the game's run, such as The Mirror of Galadriel (1R55) 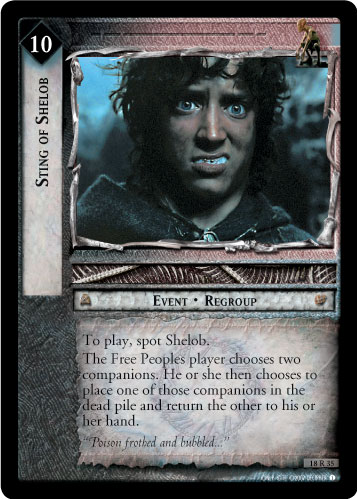 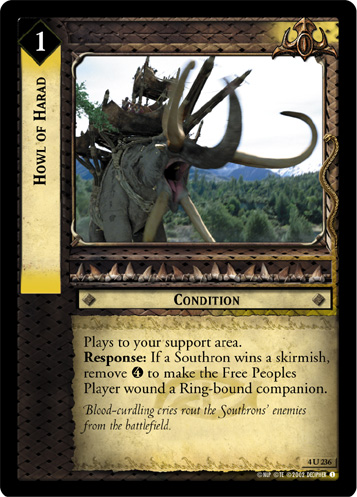 . Decipher issued more errata in Rise of Saruman and Treachery & Deceit than any other sets, due to the hasty production process as the company imploded. Those final errata issued were the last official gasp of communication from Decipher concerning the game, and they occasionally did not actually repair the card or instead made it worse, such as Frenzy of Arrows (18U79) 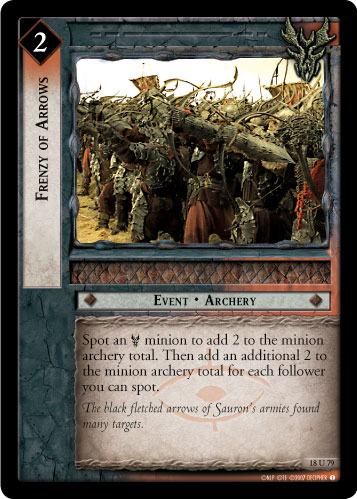 infamously being made literally unplayable (as there were never any

As a rule, Decipher avoided errata when possible, the logic being that nobody wanted to open a fresh new card only to discover that the words printed on that card were not how the card was to be read. If a problematic interaction was discovered, a card was much more likely to be banned (added to the X-List) than to be errata'd, with the only exception being if the problem card was in the most recently released set. This is most clear in situations where a new card combo'd with an old card caused an infinite loop, where the most frequent result was the old card getting X'd (such as Steadfast Champion (7U49) 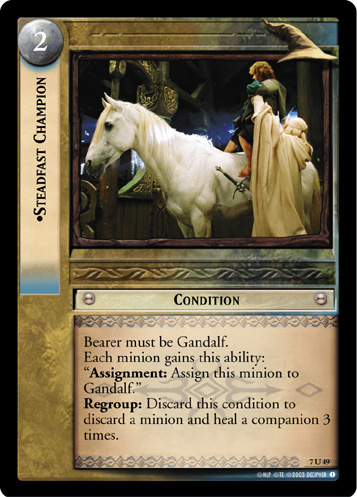 getting banned in the wake of the more recently released Treebeard, Keeper of the Watchwood (10R18) 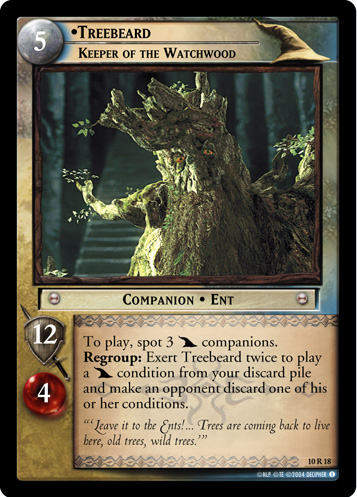 If however a card was simply too good for its own sake, or the detrimental combo was with other cards released in the same set, then errata would reluctantly be issued, usually in the form of additions to the Current Rulings Document.

Decipher also issued a number of so-called "clarifications" through the same avenues as errata, which were ostensibly to repair inconsistent verbiage, typos, misprints, and other oversights. For instance, Nice Fish (15C46) 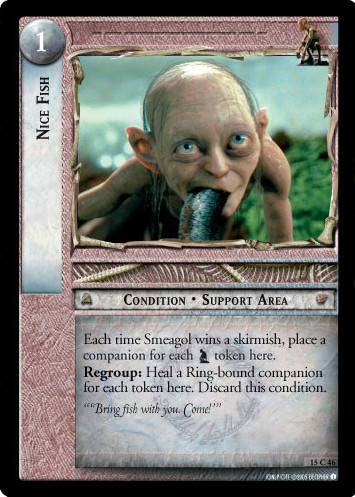 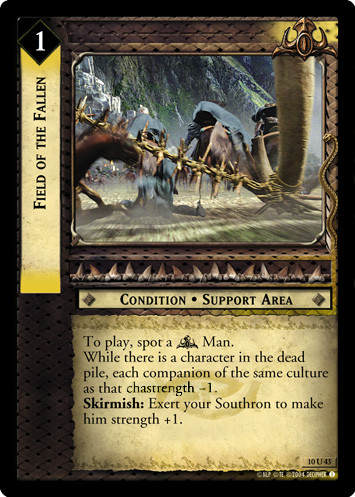 had major typos in their print run which made the cards hard to understand, Axe Strike (1C3) 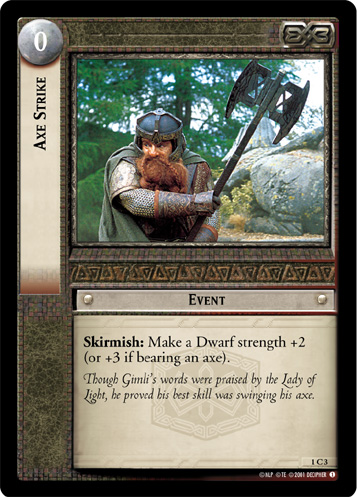 originally referenced "axe" as if it were a keyword, and Úlairë Otsëa, Lieutenant of Morgul (1U235) 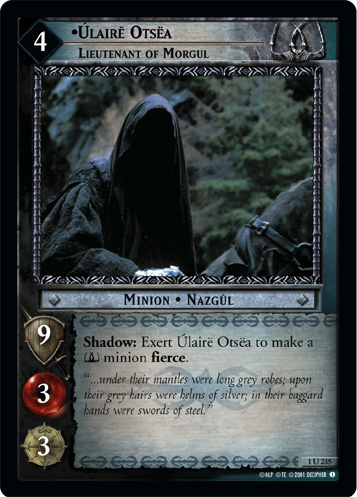 originally had its title spelled wrong.

In many cases, however, "clarification" was used as a fig leaf to cover up what were essentially errata with actual material changes to the card. For example, Elven Brooch (4U63) 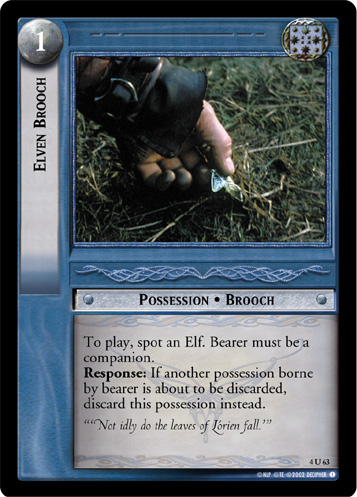 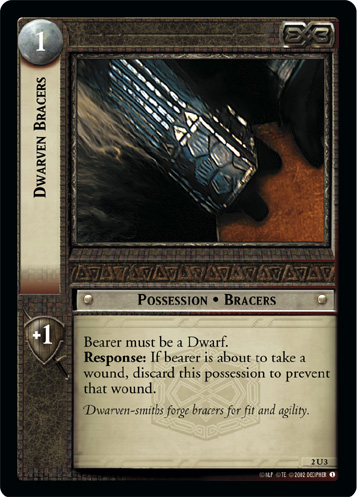 ), and yet the ruling wants to pretend it's anything besides an errata.

The major difference between whether a card was issued a clarification or an errata appears to come down to whether the issue was perceived as an actual oversight on Decipher's part (leading to an errata) or poorly worded text that did not capture the actual foreseen intent of the developers (leading to a clarification).

About 42 clarifications were issued by Decipher, which is almost twice as many as errata. Clarifications are included in the below table of errata.

In some situations, cards which had been errata'd were reprinted, and in those cases the card's print version would be incremented and the version letter would be added to the lower right-hand corner (A for first revision, and B for second revision, although no card besides The Mirror of Galadriel (1R55)

ever had more than 1 revision).

A handful of clarifications ended up reprinted, such as for Axe Strike (1C3)

. Some clarifications ended up essentially reprinted in a later set, such as Drawn to Its Power (1U211) 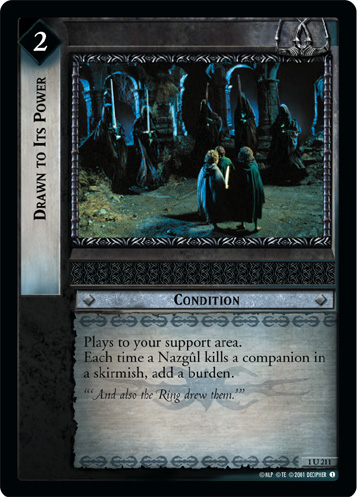 having its clarification inherited by Drawn to its Power (11S209) 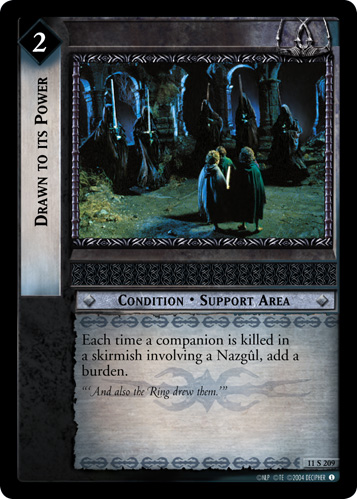 List of Cards With Official Decipher Errata or Clarifications[edit]

The Player's Council fan group have issued errata for cards as part of their effort to promote and encourage the game. These errata are issued primarily on the GEMP online platform, first in opt-in playtest formats and then into public release as part of the official PC formats. Images of such cards can be found on the PC image repository.

See PC Errata for more in-depth discussion of each errata and why the card was addressed.