While there are only three basic win conditions, usually the emphasis is more on which of them you're focused on and how you plan to execute it. Your Free Peoples deck might be more focused on playing conservatively and surviving (and might even help your Shadow deck cycle or filter) or more focused on becoming very strong and running down the site path. Your Shadow deck might plan to swarm your opponent and overwhelm their ring-bearer, stack up burdens to corrupt the ring-bearer, simply beat down whatever companions your opponent plays, or, again, support your stronger Free Peoples side by cycling and filtering.

Some decks might bring a specific card or combo of cards as a backup or alternate win condition. For example, a

Moria Shadow deck might be focused on winning with a traditional swarm, but also bring Lost to the Goblins (1R189) 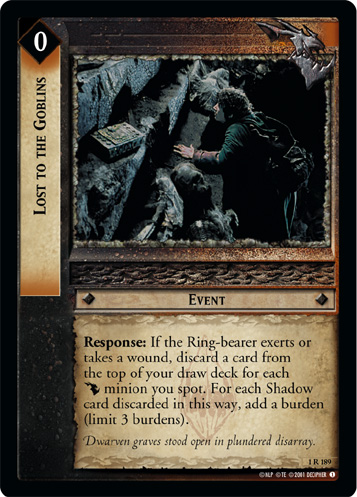 to occasionally catch the opponent unawares.

A small handful of cards automatically corrupt the ring-bearer regardless of resistance, and are occasionally referred to as win condition cards. However, all of them are only rarely played.