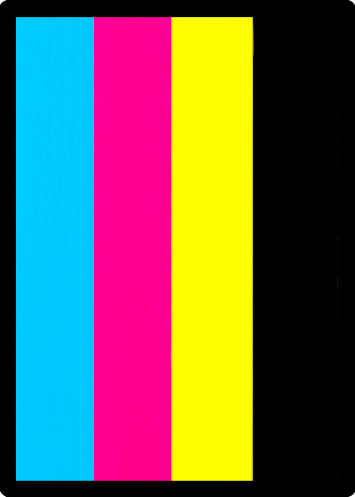 Print Test Cards, more properly called Spacer Cards, were card-shaped swatches of color inserted into Uncut Sheets as a means of marking where one series of cards ended and another began. These were most commonly used in uncut sheets of Starter Decks, where a single sheet of 11x11 cards could exactly fit 2 60-card decks with a single spacer card in between (60 + 60 + 1 = 121 = 11 x 11).

Starter decks were assembled by hand after being cut, meaning that a worker would take the stack of 121 cards, search for the spacer in the middle, and then place the two 60-card decks into their appropriate boxes. Since this was a manual process, the spacer card had a chance of slipping into the starter box unnoticed, which was the primary way in which these spacers would make their way onto the market.

This became such a frequent occurrence that Decipher ended up requesting a more obvious spacer card, which was much harder to miss. This transition happened sometime around Shadows, and as a result spacer cards became much less frequent as an accidental inclusion, even if they weren't completely eliminated.

The style of the color spacer card changed sometime around the printing of The Hunters, switching from a 4-color style to a 5-color one. There is some speculation that international printings may have also used this 5-color version at an earlier date, as the specifics of the color swatch selected were likely a minor detail controlled by the printing company itself.

The 5-color version exists in both foil and nonfoil variants, as the spacer was used in the RF sheet for The Hunters (see gallery below). The black spacer also exists in a foil variant, although the origin for this is more obscure and currently unknown. Due to the nature of how foiling works, it can be difficult to tell the difference, as the foiling layer does not look reflective if ink is printed on it, particularly with coverage as complete as on the spacer card. Typically the only way to tell is if the foiling is exposed around the cut edge, or if a nick or scrape on the card's face cuts into the ink and reveals the foiling beneath.

Besides the broad strokes, there is no way to differentiate what set or pack a spacer card was printed in, so the only way to know is if the collector recorded it at the time the card was pulled from a pack.

Click through to any image to see its full resolution.