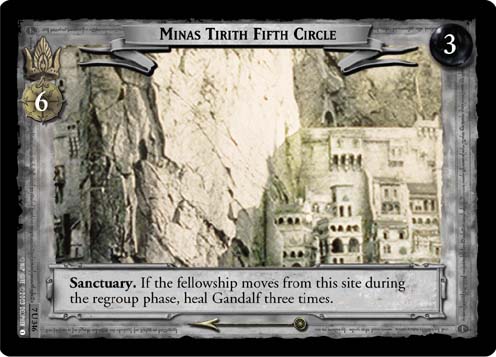 Sanctuaries such as this one allow the Free Peoples player a chance to rest and heal, and most movement in the game is based around reaching the two Sanctuaries at the right time. This one could allow the healing of 5 wounds on any companion, or 3 from Gandalf, depending on how it's used.

Healing is the act of removing damage tokens from your characters, and thus restoring vitality. The word "heal" means to remove a single damage token, or in other words restore 1 vitality. Healing multiple times is always explicitly explained in a card's game text. The act of healing is usually the effect of explicit game text and so almost always has some sort of cost associated with it.

There are two exceptions to this general rule. One is the Fellowship action of "discarding to heal", which is done by discarding a unique character card from hand to heal a character with the same name. This action is always available to the Free Peoples player during the Fellowship phase. The other is healing at a Sanctuary, one of two sites along the adventure path (marked grey in Movie block). If the Free Peoples player ends his turn on a Sanctuary site, then at the start of his following turn 5 wounds may be healed.

The difference should be noted between healing a wound and healing a character. Text worded "heal a wound" or "heal X times" is a general action and can stack on the same character; for instance, at a Sanctuary ("heal up to 5 wounds from your companions"), all 5 of the wounds you heal could be on the same companion, or you could split it 3 on one and 2 on another, or 1 wound from 5 companions, or however you like. Healing a character is more limited; if a card says to "heal a character 3 times", you can only heal the chosen character up to three times, with no other combinations available with other characters. Healing a character with maximum vitality does nothing.

Most Free Peoples cultures have at least some ways of healing available;

Shire in particular have the more varied and versatile means of healing (see Hobbit Hospital for a particularly effective, well-known setup). Shadow is more limited when it comes to healing, which is natural considering that Minions are not reused from turn to turn. Typically, any Shadow healing will be used to heal exertions to perform phase actions repeatedly. In some cases, such as with Enduring minions, healing can even be a negative thing.

When a wound is removed from a character, this represents resting or healing. When you “heal a character,” you remove one wound.

If a card tells you to “heal 2 companions,” you must choose two different companions to heal one time each (you cannot heal one companion twice).

Once a wound token is placed, whether from exerting or wounding, it can be healed by any effect that heals a wound.

Generally, your fellowship only heals at a sanctuary you reach on the adventure path.

See also discard to heal, for each.