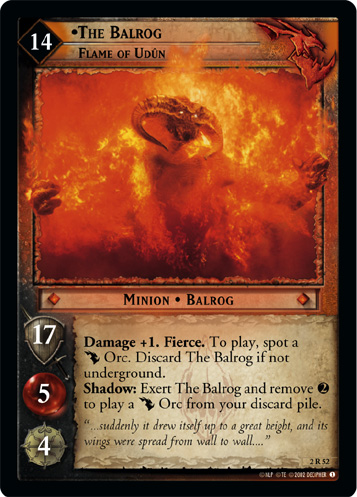 It's difficult to hold off a minion this size once. Two times is more than twice as hard.

Loaded keywords are bold one-word labels included in the game text of many cards. All keywords are treated the same by the game: a character either has the keyword or does not. A character without a particular keyword printed on it can have that keyword added, and a character can have a keyword removed regardless of whether it currently has that keyword. It is possible for certain sources of a keyword to be removed apart from others, though only damage bonuses from possessions are treated this way (for example, Trapped and Alone (3U72) 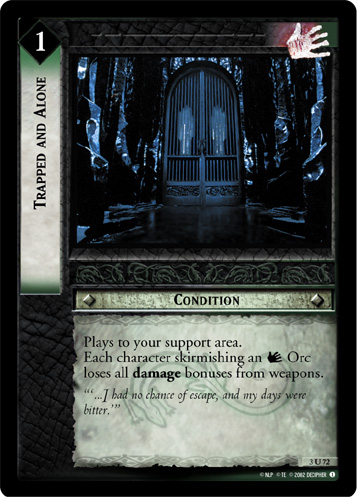 The Balrog shown to the right has two loaded keywords: Fierce and Damage +1. Fierce indicates that the Free Peoples player must assign it to a skirmish twice per site, and damage +1 adds to the number of wounds it dishes out in a winning skirmish. These two keywords further establish that there are two different kinds of loaded keywords: numeric and non-numeric.

Numeric keywords are always paired with a positive number and are unique in that gaining these keywords multiple times changes their impact: for example, The Balrog's Sword (2R50) 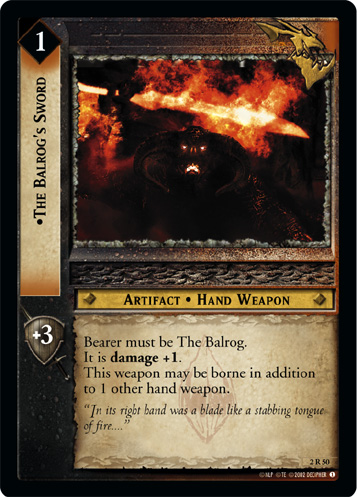 further increases the number of wounds The Balrog delivers. While at first numeric keywords seem similar to statistics such as twilight and strength, there is no way to reduce a numeric keyword (only remove certain sources). Exactly how gaining a numeric keyword multiple times impacts the game depends on the keyword.

Damage and defender bonuses are added together to a single "damage bonus" or "defender bonus." For example, any version of Gimli bearing Gimli's Battle Axe (1R14) 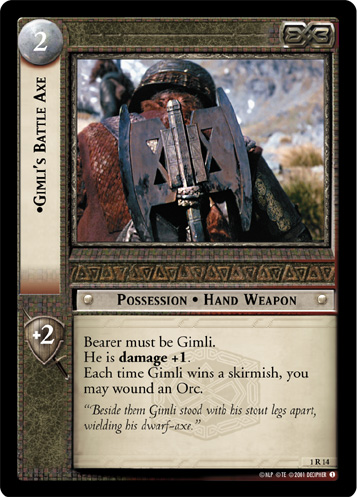 will be at least damage +2 (especially important for Gimli, Bearer of Grudges (9R+4) 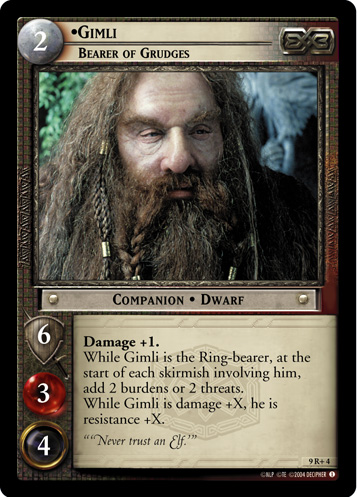 ). Cards that spot the lowest numeric version of one of these keywords can also spot all higher numbers, meaning Swordarm of the White Tower (1C116) 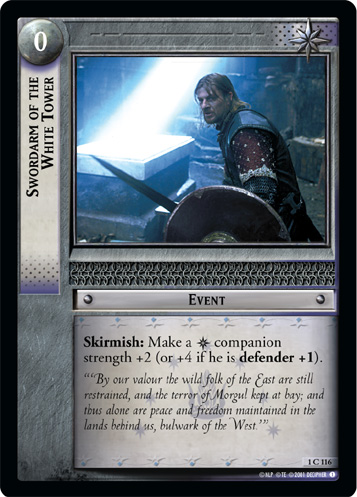 gives 4 strength to a companion that is at least defender +1.

Meanwhile, Ambush and hunter bonuses remain separate even though it appears that they could be added together. A character with one or more of these bonuses is "with ambush" or a "hunter." When a minion with the keyword ambush

is given the keyword ambush

by another card or special ability, each of those instances of ambush is resolved separately rather at once. (Cards like Three Monstrous Trolls (3C114) 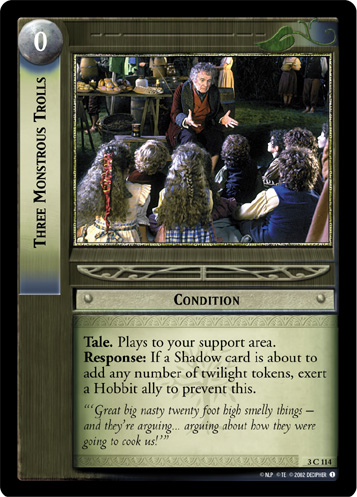 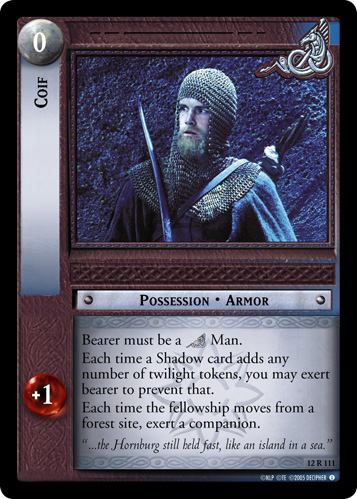 would only apply to one of those instances at a time.) Similarly, a companion with 3 hunter 1 bonuses is not hunter 3 (although there is no distinction between the two in-game).

Although toil is a numeric keyword, there is no way to give a card toil or modify the existing toil number of a card. (Úlairë Enquëa, Black Threat (12R175) 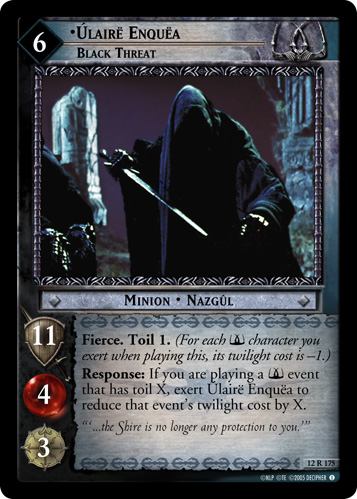 is as close as it gets.) There is no defined interaction for what would happen if a card had two instances of toil.

Non-numeric loaded keywords work the same regardless of how many "times" a character gains it. In the case of fierce, that minion skirmishes twice per site and that's it; Whip of Many Thongs, Weapon of Flame and Shadow (12R80) 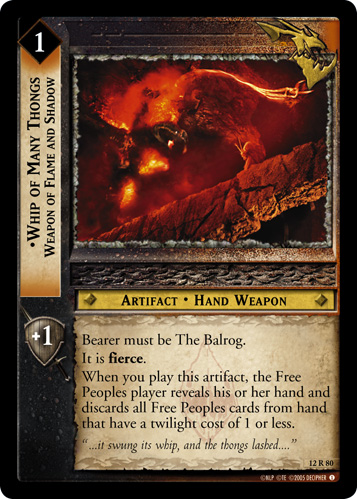 will not provide any sort of cumulative fierce benefit to The Balrog above. When such an effect was desirable, Decipher skirted around the keywords to achieve the same result. A few examples: The Witch-king’s Beast, Fell Creature (12U184) 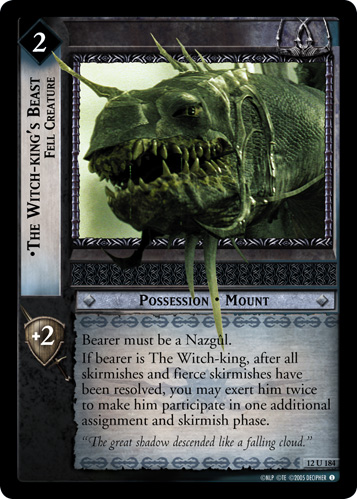 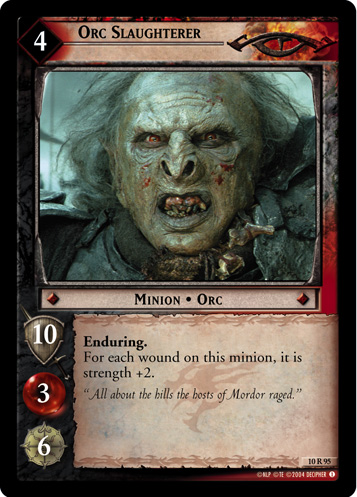 has a strength bonus from its game text that stacks with enduring, and The Splendor of Their Banners (1R62) 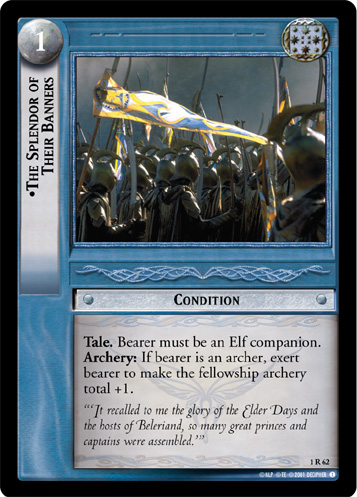 allows a single archer to add more than just one to the archery total.

Artifacts and possessions often -- but do not always -- have a special loaded keyword called Item Class. A character may only bear one card of a given item class at a time, but some hand weapons (Hand Axe (2C10) 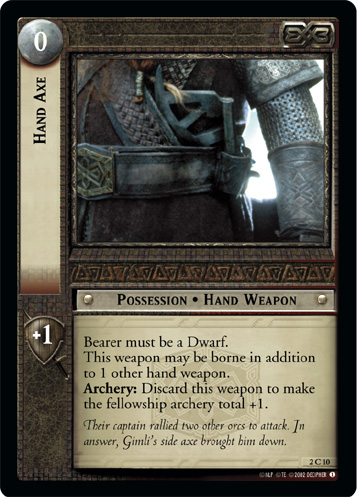 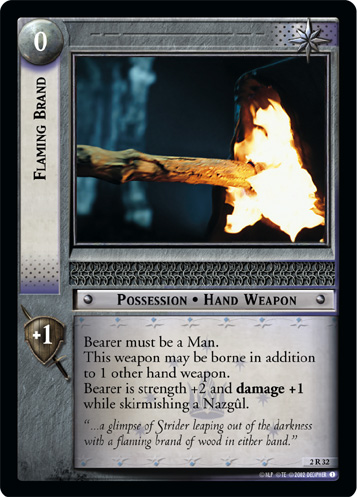 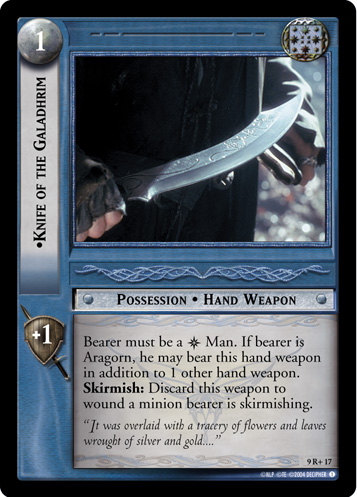 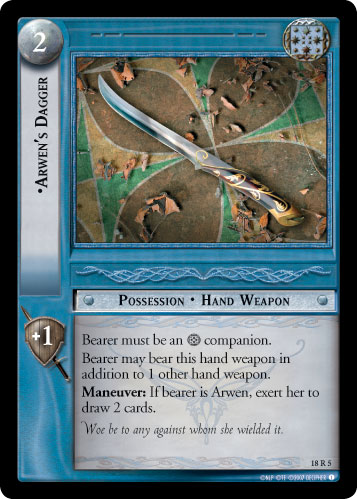 ) can be wielded alongside another hand weapon. Box, Bracers, Brooch, Gauntlets, and Phial each only appear on one card. In these cases, the item class effectively acts as "limit one per bearer" text (although the lone Gauntlets and Phial are already unique). Palantir appears on three cards, but they all have the same unique persona anyway. Elven Armaments (18U8) 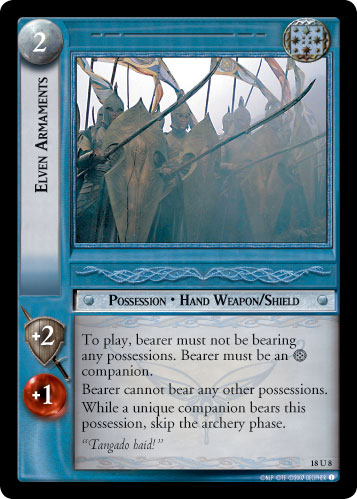 is notable for having two item classes, although in practice this only prevents the use of Aiglos (9R+12) 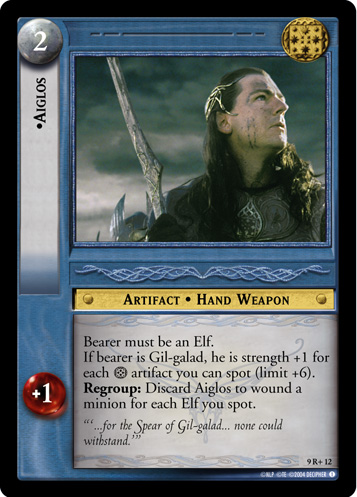 . (No other shields can be played on any

Elven characters, and the card prevents all other possessions anyway.)

See the pages at the keywords below for in-depth discussion on each individual keyword's effects, or see Unloaded Keywords for an explanation for all other bolded keywords.