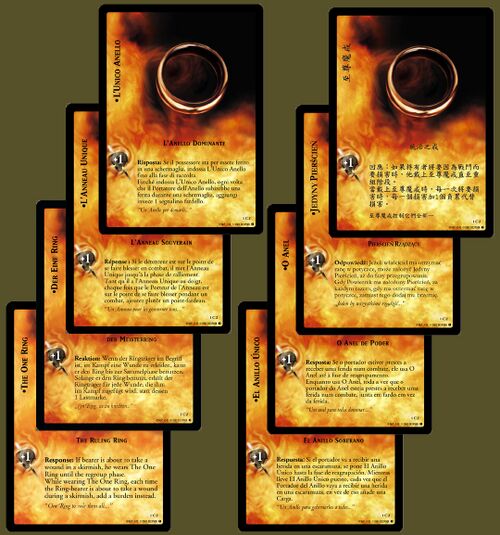 The Lord of the Rings TCG was printed in more languages than just English, even if English was far and away the most prolific. Printing for overseas languages was licensed out by Decipher to separate companies, who all managed the printing and distribution within their local markets. This means that there are some variations between languages regarding the glossiness of the card stock and paper weight, etc, but the differences are minor.

Foreign language overstock was one source of filler for the cards included in Reflections booster packs, meaning that there was more crossover between owners of different languages than one might otherwise expect.

Some promotional cards were never printed in English, such as Úlairë Otsëa, Zwarte Schim (0P103) 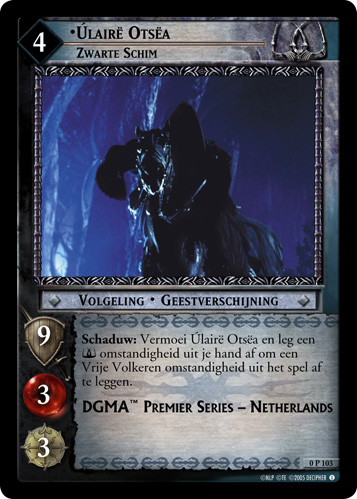 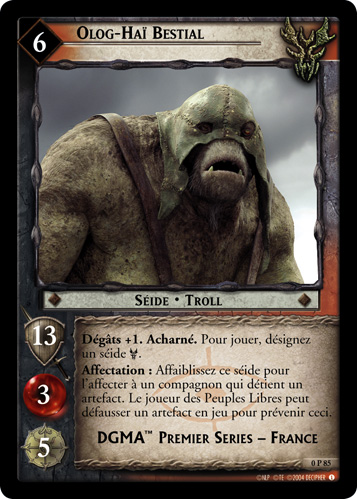 . In particular, a series of Tournament Foils were issued to each of the German, French, and Italian licensees to manage, which were awarded according to their own judgement. This makes some of the TF series exceedingly rare, due to the regional restriction and subjective nature of distribution.

Not all sets were printed in all languages; in fact, the number of languages shrank over the lifetime of the game as lukewarm markets were shut down. Various languages received nothing more than a handful of one-off promos, when the local demand did not meet the requirements for a licensing deal to emerge.

Unfortunately, image coverage for these cards is harder to provide than those in English. While Decipher's website was still active, it hosted image files for many cards, but in the aftermath of Decipher's decline, the English cards were salvaged by community members while the translated cards were overlooked. Some were able to be farmed from the Wayback Machine, but this had spotty coverage up to set 5, and none after that point.

(If you have an alternate language card that is not represented on that card's page, we encourage you to make a high-resolution photo or scan and submit it to the wiki for archival!)

The cards that were printed from each language are as follows:

✔ = Full set produced in that language

❌ = No cards from this set produced in that language

✴️ = Some cards from this set produced in that language