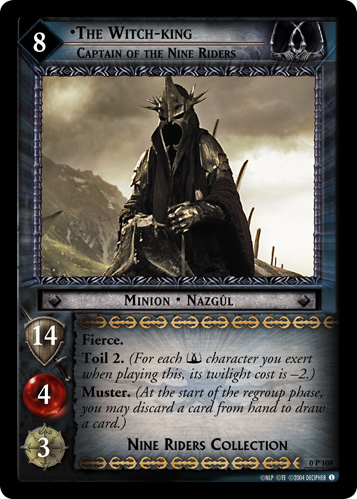 The Masterwork template was utilized once again to striking effect.

The Nine Riders Collection refers to a promotional reprint of all nine Nazgul from the Shadows set (except for Enquea, who was printed in Bloodlines). All nine were reskinned in the Legends Masterworks alternate

Ringwraith template and given the foil treatment. The collection was announced on June 8, 2005 and was available through the Decipher Store for $15.[1]

Like the earlier cards of the Weta Collection and unlike the later Wraith Collection, these cards were printed as part of set 0, the Promotional set. As they were reprints of existing cards, they were tournament legal wherever set 11 was permitted.